It’s hard to keep up with the throng of newly christened breweries in the area, but when the brewery in question is only a mile or two away, how can I not stop in? Of course, proximity isn’t the only factor in play here, otherwise I’d be chatting up uber-local Boxcar’s generally mediocre offerings (to be fair, they have opened a new brewpub, and it’s a fantastic space, even if their beer still seems to be subpar). But being close helps, and Levante has more to offer than Boxcar ever did. (Full disclosure, one of the brewers there is a former coworker.)

They formally opened about six months ago, but had been open on a provisionary basis for a month or two before that. I’ve actually been there several times over the past few months, but I’ve only just recently gotten around to taking some formal tasting notes. The tasting room is just part of the little warehouse where they’ve set up their brewery, but they’ve done a good job making it a welcoming area, and they have a great little nook for food trucks to sidle up to the building. They’re only open a few days a week, but they’ve gradually been expanding that, and their distribution footprint is getting larger as well.

Their standard lineup is comprised of your common opening break of styles (IPA, Pale, Rye, Wit, Kolsh, etc…), but their rotating limited releases have only gotten better over time. Out of the standard lineup, I’ve enjoyed Pallido Pale Ale and Ranger Rye the most (and the blended, bourbon barrel aged version of Ranger Rye? Excellent!). I’ve also quite enjoyed the Glen Mills Mild (now dubbed Mild Porter because no one understood what a mild was (I don’t think I have any British readers, but I’m guessing some facepalms are in order)), a perfect little 3.2% session ale. They’ve been somewhat less successful with Belgian styles, though their most recent attempts have been improving.

But where they’ve really nailed it is with stouts. Longtime readers know I’ve been pining for a local brewery to really embrace stouts, and I appear to have found my savior. Darkness is Spreading was a superb little milk stout with well balanced chocolate and vanilla additions. And then we come to Bullit Train, an excellent imperial stout made with bourbon vanilla. Both stouts were delicious, so when my brewer buddy informed me that they’d be releasing a bourbon barrel aged blend of Bullit Train on the day after Christmas, I was all over it. Merry Boxing Day! Some notes on that and a double IPA are below: 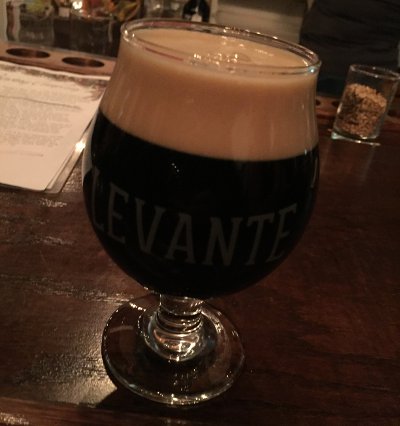 Bullitt Train Bourbon Barrel Vanilla Stout – A blend of three batches, one of which was aged in Heaven Hill bourbon barrels, then it was put on the nitro tap. Pours a deep black color with a finger or two of gorgeous, dense light brown nitro head. Smells nice, big wafts of vanilla, caramel, hints of roast and chocolate. Taste follows the nose, lots of vanilla, some more roast than the nose, hints of the caramel and chocolate. The bourbon is there, but it’s a light touch (I don’t know the details, but I’m guessing only half or so of the blend was BBA). Mouthfeel is smooth and creamy, as befits a nitro pour. High medium to full bodied, very approachable at 10.5%, no real boozy notes at all. Overall, Levante has proven quite adept at stouts, and this is no exception! A- 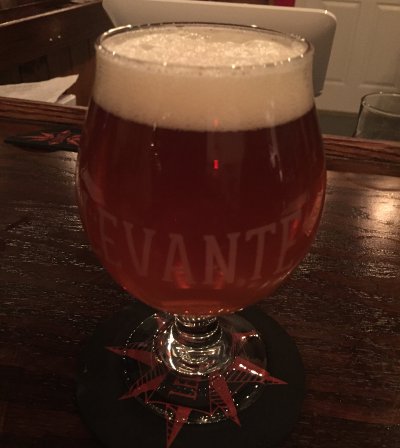 Panic Room – I have to admit that I’m not the biggest fan of Levante’s single IPA, The Chief. However, their double IPAs are a different beast altogether. This pours a pale golden orange color with a finger or two of fluffy white head. Smells great, big citrus and pine hops. Taste hits the hops hard, again citrus and pine, with a substantial but well balanced bitter bite to it that lasts through the finish. This isn’t one of them newfangled northeast “juicy” IPAs, but it’s well crafted and delicious. Mouthfeel is medium bodied, well carbonated, no discernable booze, very nice. Overall, rock solid DIPA! B+ maybe an A- if I’m generous…

A promising start from an uber-local brewery! I am greatly looking forward to where Levante goes next. I’m sure you’ll be hearing more about them in the near future, so stay tuned!