Another year, another verse in The Bruery’s 12 Days (beers) of Christmas. I always enjoy these, even when they’re not spectacular, because I’m just a sucker for the concept of a 12 year vertical series centered around a Christmas carol. Some of these have been great, most have been middle ground. Most are a take on a Belgian dark ale, and some even incorporate ingredients inspired by the verse. For instance, 3 French Hens was partially aged in French Oak, 5 Golden Rings was the only “golden” colored beer in the series, gooseberries were added to 6 Geese-A-Laying and now we come to 8 Maids-A-Milking, which is obviously a milk stout. A Belgian-style Imperial Milk Stout, to be exact. This is actually a somewhat interesting combination. Belgian yeast typically ferments through at a higher attenuation, leaving a beer lighter bodied and more carbonated than the same recipe with a different yeast. But if you add in some lactose, you offset that, which is a nice concept. Also, I’ve found that this type of beer ages pretty darn well, so now that we’re on the downslope of the 12 Days of Christmas (zoinks! Has it really been that long?), this one should most certainly be drinking well in a few years. 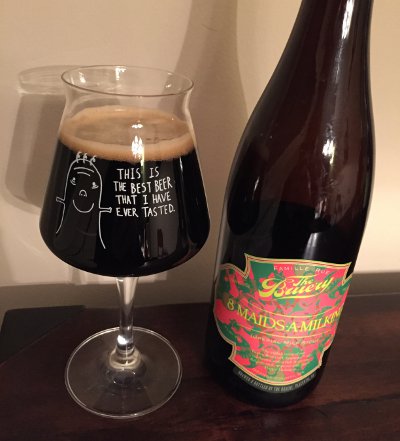 The Bruery 8 Maids-A-Milking – Pours a very dark brown color, almost black, with a finger or two of khaki head that sticks around for a while and leaves some lacing as I drink. Smell has a nice estery component that comes out before the more roasty stout-like aromas emerge. Taste is very sweet, with that fruity ester character coming through strong in the taste along with some more spicy phenolic elements from the Belgian yeast, clove and the like, finally some roasty notes are pitching in. Mouthfeel is highly carbonated but smooth and full bodied, the lactose cutting any dryness from the yeast without getting sticky, and a little booze too. Overall, this is a solid Belgian style stout, nothing to go crazy over but a nice holiday pour. B+

This was good, but I think it could really benefit from some barrel aging. I keep waiting for a return to the BA Christmas beer from the Bruery, but alas, it has not happened yet. I remain ever hopeful. See you again when those Dancing Ladies appear!