Okie is the shortened form of Okie Dokie, which is itself an alternate way to say Okay, which can be abbreviated OK, which is the two letter state code for Oklahoma, which is where Prairie Artisan Ales is based, which is why this beer is named Okie. Though clearly it should be called Oakie, since this is a whiskey barrel aged imperial brown ale. We will give them the benefit of the doubt and guess that these Prairie guys don’t enjoy puns as much as most brewers. You stay classy Prairie. In the meantime, I will drink your beer: 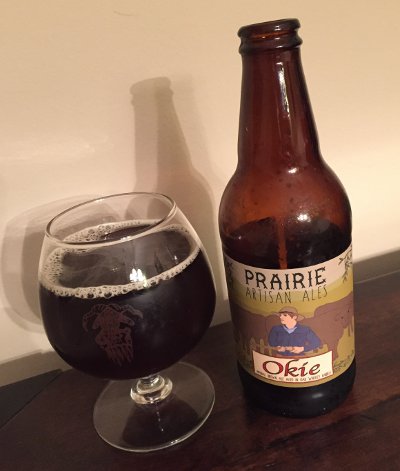 Prairie Okie – Pours a clear, deep brown color with some amber highlights and half a finger of white head. Smells of dark malts, toasty, nutty, toffee, not a lot of barrel character, but some vanilla comes through. Taste is very sweet, some of that typical brown ale toast character, a little nutty, maybe hints of molasses, again very little bourbon barrel, but it’s there, and it contributes to the sweetness factor. Mouthfeel is well carbonated, full bodied, very sweet, almost creamy. Full bodied, but not super heavy, and it feels mellower than you’d expect from a BA imperial brown. Overall, this is quite nice, though one could wish for a little more barrel character. B+

I think I’ve generally enjoyed everything I’ve ever had from Prairie, but few things have blown me away. This one is on the upper end, and I have generally been impressed with their barrel aged stuff. Nothing on the immediate horizon, but I will clearly be seeking out more from these fine gentlemen.