The wishful thinking approach to fall: start drinking fall beers in the hopes of precipitating a drop in temperatures. We’re fast approaching my favorite time of year, so I’m breaking out some more fall-based beers. We’re not really ready for pumpkins just yet, but an imperialized Oktoberfest beer brewed with blueberry honey and brown sugar that’s then aged in Buffalo Trace bourbon barrels and conditioned on blueberries? That’s the ticket. It’s also perhaps a bit much, but I’ll be damned if it doesn’t work: 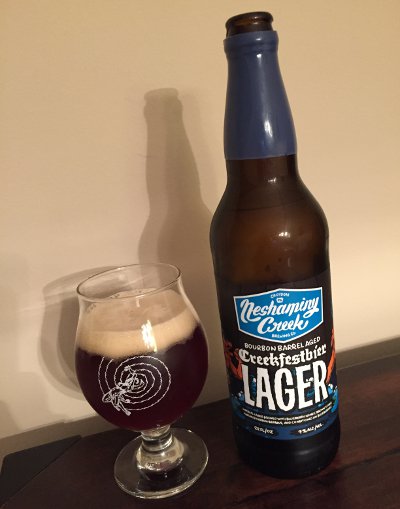 Neshaminy Creek Bourbon Barrel Aged Creekfestbier Lager – Pours a slightly cloudy, deep, dark amber brown color with a finger and a half of off-white head. Those blueberries certainly show up in the nose, actually meshing pretty well with bourbon, oak, and vanilla, giving it an almost blueberry/bourbon jam kinda aroma. Taste is sweet, rich bourbon and oak up front yielding quickly to those blueberries which take over from there, a slight fruit tartness lingers in the finish. The Märzen base is certainly there, but it’s clearly taking a backseat to blueberries and bourbon. Mouthfeel is full bodied and rich, plenty of carbonation, a little fruity acidity in the finish to cut through the heaviness, but still a sipping beer. I don’t generally think of an Oktoberfest (even an imperialized one) as having the body to carry a barrel aging treatment, but this is really well done. Maybe we should see more of this. Overall, this works better than expected, quite tasty! B+

I feel like this is a more successful barrel treatment than BBA Leon and I found it really enjoyable (I would like to try a non-blueberry version though, that tart note works fine here, but it might be even better without that…) Next, I need to get my hands on, well, pretty much all of their other barrel aged treatments… and I’m sure a Punkless Dunkel will make its way into my house this season as well (even if you’re not a big pumpkin beer person, that one’s worth trying).