Lomaland sounds like some ill-fated Lego theme park utopia, but the real-life origins of the name aren’t that far off. Founded in 1900 by a bunch of proto-hippies, Lomaland was a utopian Theosophical community located in Point Loma in San Diego. Apparently they were fans of weird architecture (Ivo Shandor? The timeline is actually just about right for that, though Shandor’s work is famously in New York) and planting trees, orchards, and shrubs, much of which survives to this day. I mean, it’s no Cloud Cuckoo Land, but it’s probably about as close as the real world ever got to such a place. Or not. I’ve never been to San Diego and know nothing about anything, so we should probably just get to the beer, which is a pretty traditional rustic saison in the Dupont mold, maybe a little on the lighter, drier side. Let’s catch a ride to Cloud Cuckoo Land and hang with Princess Unikitty whilst imbibing this: 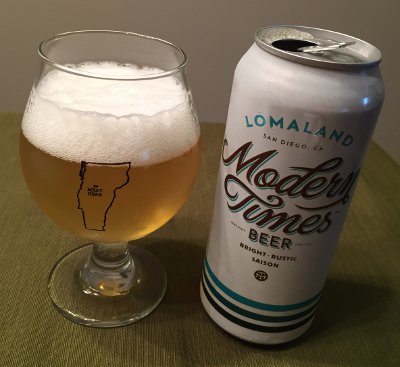 Modern Times Lomaland – Pours a clear straw yellow color with a few fingers of fluffy white head and decent retention. Smells very spicy, cloves all over the place, a little peppery note here or there, some fruity esters doing their thing. Taste is a little more subdued, but it’s the same gist as the nose, a little spice, clove and pepper, some fruity flavors coming to the fore towards the finish. Mouthfeel is light bodied, well carbonated, crisp, and very dry, on the quaffable side too. Overall, rock standard saison material here, not going to blow you away, but a nice canned beverage. B+

Many thanks to Jay of Beer Samizdat for sending this one along. Modern times as a pretty great line of beers. I’d love to get my hands on some Funky Lomaland (basically this beer dosed with Brett and aged in wine barrels) or the BA variants of Monsters’ Park.