Vault Brewing Company opened their doors not quite three years ago, one of the many, many, many new breweries putting a different spin on the concept of a “brewpub”. Seriously, how are we supposed to keep up with all these shiny new breweries? In this case, they’ve got a very unique atmosphere, unconventional menu, and of course, beer. The building was originally constructed around an 8,000 pound vault door in 1889 for Yardley National Bank, hence the name of the brewery (one wonders what the name of the brewery would have been had their original location, an old golf ball factory on the Philly waterfront, panned out) and the general tenor of their decor. 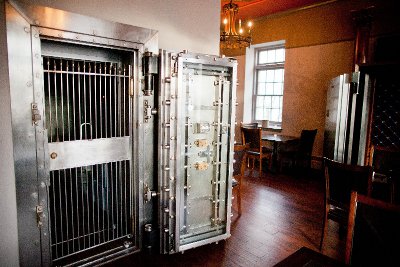 The vault has basically remained in place for 125 years, though it’s now used primarily as a beer-conditioning cellar these days. It’s a very warm and inviting location, wrought iron and wood tones with a kinda speakeasy vibe. A pity since it is so far from Kaedrin HQ. However, it is not so far that the occasional trek is unwarranted (it is Northeast of Philly, right across the river from Trenton, NJ – about an hour by car, two by train), as it was this past weekend when they held a beer release for their Mosaic Imperial IPA cans. A single hopped DIPA, part of a new “minimalist can art” series, and I’ll be damned if that can doesn’t look very striking indeed: 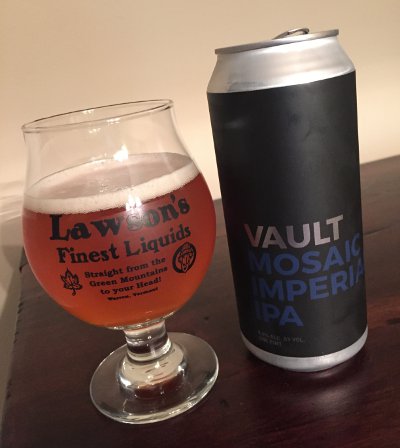 Vault Mosaic Imperial IPA – Pours a mostly clear orange color with a finger of white head that leaves some lacing as I drink. Smells nice, citrusy hops with maybe some floral notes and pine kicking around. Taste has a nice sweet start followed by citrusy hops that give way to more dank, piney hops and maybe even some crystal malt character. As it warms, the sweetness amps up a bit, but doesn’t get cloying. Mouthfeel is well carbonated, crisp, clean, lighter bodied and more quaffable than your typical 8% ABV beer. Overall, this is a nice little number. It’s not going to unseat top tier DIPAs (which, to be fair, is a difficult proposition in a pretty damn crowded field), but it’s tasty and drillable. On the higher end of B+

So we’ve got yet another local brewery I need to check out more thoroughly, as I only really popped in to pick up the cans (before heading over to nearby Neshaminy Creek to snag some cans there too).