Back in the day, my first introduction to good beer was Belgian style stuff, which in America basically meant Ommegang and Allagash. At the time (turn of the century timeframe), they were roughly comparable in their offerings, but Allagash seemed a little more expensive and I was just out of college and poor. Many moons, and Allagash really stepped up their game, especially when it came to their sour program. Ommegang has played with wild yeast a few times, but seems content to put out their old standards and some new Game of Thrones stuff, which is fine, to be sure, but not quite as fun as Allagash’s barrel aged wonders. Allagash was one of the first breweries in the US (citation needed!) to install a coolship (basically a long, wide, open fermenter), open their windows, and invite spontaneous fermentation, lambic style. Then they dump the resulting melange of wort inoculated with wild yeasts and bacterial beasties into a variety of old oak, wine, and bourbon barrels for extended slumbers (sour beers are not for the impatient).

This particular Cuvée is a blend of 38 barrels ranging from 1 to 5 years old. Last time I had one of these Allagash blends, they thoughtfully included a full breakdown of each barrel, complete with tasting notes and even listing barrels that weren’t used because of various flaws. Alas, no breakdown here, but I did notice that they used the hashtag #passwordistaco on their Instagram post, and these barrels have infamously been attracting attention on brewery tours for a while now (apparently since October 2013 if the barrel heads are to be believed). I guess there’s a lot of fans of The League out there. 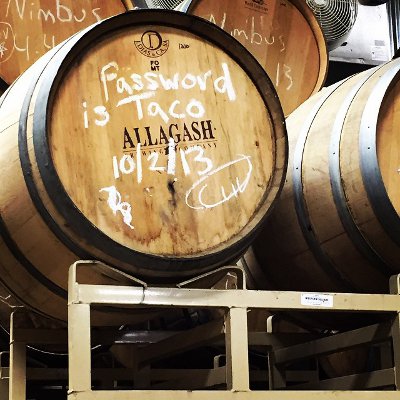 Other barrel codes you can see in various pictures around the internets include Peterman (2012), Victoria (2009), Lawrence (2011), Nimbus (2013), and Cracker Barrel (2012). This, of course, means nothing (and who knows if all of those barrels made it in the final blend), but I like the goofy names they use on their barrels. Let’s take a closer look at the result: 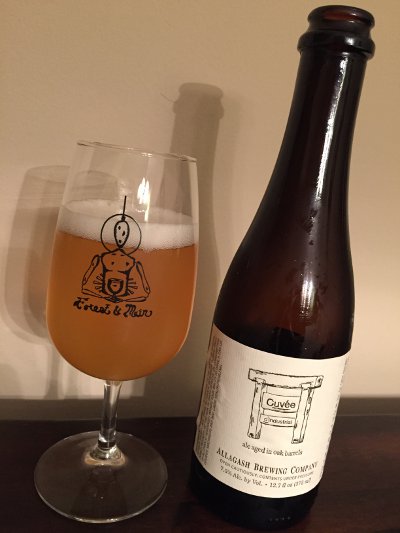 Allagash Cuvée D’Industrial – Pours a cloudy golden yellow color with a finger of fluffy white head. Smells amazing, earthy funk, oak and vanilla mixed with the barnyard, but also lots of bright fruit, feels almost like a gueuze. Taste starts off with a bright, tart fruity note that quickly transitions towards more earthy, pungent barnyard funk territory, finishing off with a well balanced sour note. Mouthfeel is crisp and refreshing, effervescent, on the dry side with a bright, bracing acidity. Overall, this is some fabulous stuff, delicious and complex. A

I need to find a way to pick up more of these Allagash sours, which have been pretty fantastic so far…