Bent Hill is only a little over a year or so old, and while they’ve not unseated the vanguard of Vermont brewers, they appear to be chugging along, making some intriguing brews. Take this series of single hop IPAs, always an interesting exercise.

What we have here today is a single hope IPA made with El Dorado. A relative newcomer to the hop scene, El Dorado was originally bred in 2008 and first released in 2010. I won’t get into the vagaries of hop breeding, but in general, breeding new hops is a challenging proposition and even once you find a promising result, it takes a couple years for the hop plant to achieve maturity. This explains the two year lead time between breeding and release, and initial release to increased production (in 2012). It was developed at a single, family owned hop farm called CLS, located in the northern Yakima valley in Washington state. I don’t know much about the hop business, but it’s got to be a boon to have bred a new, popular American aroma hop, perhaps why they named it after a legendary city of gold.

Whenever I talk to my wine-nerd friends, the topic of terroir inevitably comes up, and we invariably talk about hop terroir. Here’s another example of that: the more northern farms of Yakima valley supposedly have a more intense, colder climate that makes for good aroma hops (this could be total marketing fluff, so take that with the requisite shaker of salt). El Dorado is certainly known for its aroma, a very citrus and tropical fruit forward hop, and its high-alpha acids (for bitterness) make for a good dual purpose hop. Single hop beers are obviously an interesting way to see such differences, though in this case, it appears all El Dorado hops are grown in the same general locale… Anywho, let’s check out Bent Hill’s take on an El Dorado IPA: 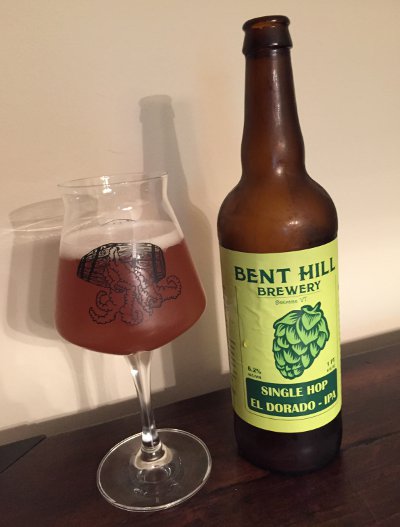 Bent Hill El Dorado Single Hop IPA – Pours a dark golden orange color, not quite brown, but inching in that direction, finger of white head that leaves a little lacing as I drink. Smell has a nice citrus and pine character, pineapples, candied fruit, with some crystal malts peeking in with their caramel and toffee. Taste is pretty dank stuff (perhaps owing to the age of the bottle?), lots of resinous pine but that candied citrus is hanging in there and brightening things up enough, crystal malts doing there thing but interacting well with the piney hops, bracingly bitter in the finish. Like their regular IPA, this has an English IPA feel to it, but with a more pronounced American hop characteristic. Mouthfeel is well carbonated, medium bodied, not quite quaffable, but almost. Overall, rock solid stuff, definite upgrade from their regular IPA. Will definitely be on the lookout for fresh bottles of this stuff next time I’m in VT… B+