Hot on the heels of Operation Cheddar III: Cheddar Harder, only about a month later, I embarked upon the more familiar, single-day incursion into Vermont. This being the case, I’m not going to cover the trip in as much detail, considering that you can go back and read recaps of my previous sorties into Vermont. Instead, I’ll recap a few beers I’ve had, and let you know about a few new places I visited this time around.

First up is a brewery that’s not even in Vermont. I know, I’m the worst, but it was literally walking distance from the place I was staying and it had just opened less than a week before I visited. How could I not check it out? Enquiring minds want to know about all these new breweries popping up all over the place, and someone has to take up the slack. And until they do, you’ll have to deal with my silly notes. It’s called Fulton Chain Brewing (named after the chain of lakes that winds its way through the Adirondacks), and it’s got a promising start. They only had 4 beers on tap, but plan on having more (things were still coming up to speed for them, they were still waiting on glassware for flights and even empty growlers). Between three friends and myself, we tried all of them, and they’re decent. The clear highlight for me was Lake Hopper IPA, an 8.5% ABV DIPA made with 8 hops to represent the 8 lakes in the Fulton Chain. Nice juicy DIPA, super cloudy stuff, a little raw, but very promising. Not exactly a Heady killer or anything, but pretty darn good for a place down the road. 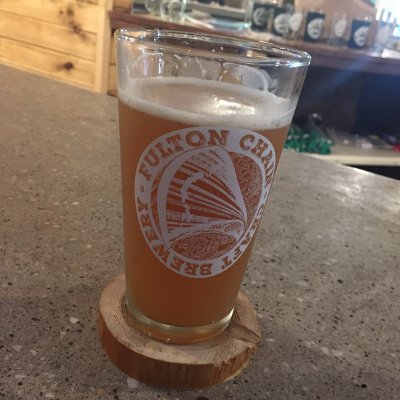 I also tried a beer called Stealth Buddha, a Scotch ale made with small amounts of smoked malt, quite approachable. Not going to inspire road trips or anything, but nice enough. Really happy this place opened up, and I’m looking forward to visiting again once they’re more established. They appear to be quite small, but they’ve got a gorgeous tasting room (including an amazing single piece countertop that snakes its way throughout the space), a nice location, and they show promise.

As for Vermont, I made a few of the typical stops, including the Warren Store, a couple places in Waterbury, Lost Nation (got a great pulled pork thing that wasn’t quite as good as the smoked lamb pita sandwich I had last time, but was still fantastic), and Hill Farmstead. 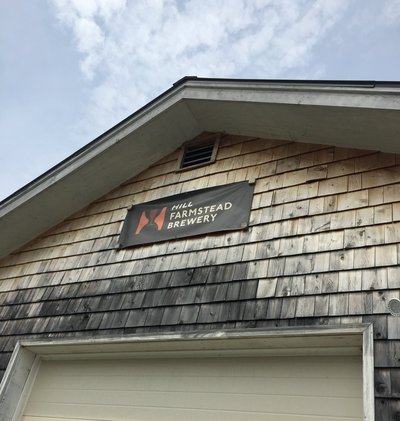 Some spoils of war: 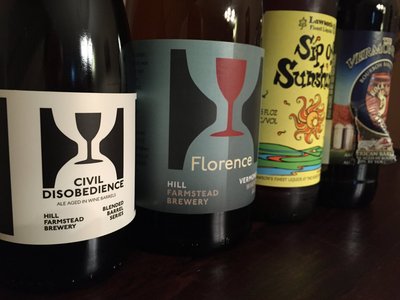 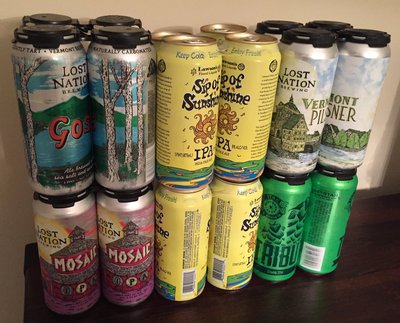 I didn’t snap a pic of everything because I bought a bunch of stuff at Lost Nation and Hill Farmstead that I had snagged last time. Some new stuff includes my most prized acquisition, Hill Farmstead Civil Disobedience 14 (barrel aged blend of Anna and Florence), some of this year’s batch of Florence (I still have some of last year’s batch, so I’m hoping to do a comparison). Also some Sip of Sunshine (it comes in bottles and cans!) and a bottle of Rock Art’s Bourbon Barrel Aged Vermonster. Lots of Lost Nation Cans, including some Mosaic and Vermont Pilsner (both of which are very nice), and of course, some Gose. Moar Sip of Sunshine cans, and I took a flier on 14 Star Tribute DIPA… Finally, I made my way to Four Quarters brewing to fill up some crowlers. 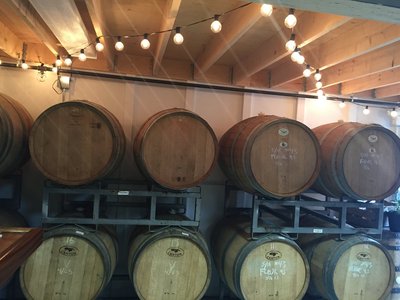 Another pretty small operation, they impressed me during the American Craft Beer Festival in Boston last month and I was really hoping to snag some bottles. Alas, it was not to be, but I did get some crowlers. Here’s Chrysalis, a smoked hoppy amber ale: 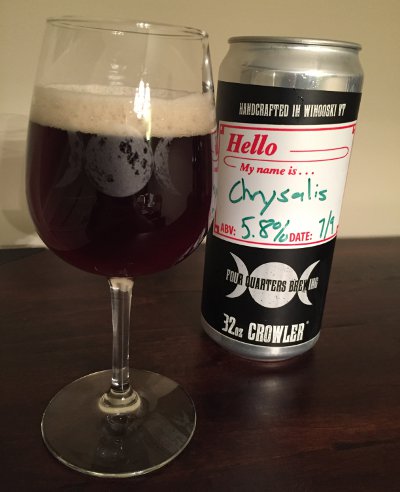 Four Quarters Chrysalis – Pours a very nice, mostly clear dark amber color with a finger of bubbly light tan head that sticks around for a while. Smells of citrusy hops initially, but then you get that malty, smoky background that actually sets the hops off rather nicely. Taste starts off on the sweeter side, typical amber and crystal malts, and the smoke is somewhat muted, but it’s there and playing along reasonably well. Hints of piney, bitter hops come in towards the finish as well. Mouthfeel is medium bodied, moderately carbonated, and silky smooth, pretty easy going stuff. The smokey character is not dominant at all, and just adds a bit of complexity to a pretty typical hopped red ale. Overall, it’s a very nice beer, not mind blowing, but interesting enough… B

I also got a crowler of Opus Dei (a very nice, quaffable little Belgian Pale Ale) and shared it with some friends when I got back. Sorry, no detailed notes there. Another thing I shared with some Hill Farmstead Society & Solitude #1, a great little DIPA (what else would you expect from them), not quite as juicy or citrusy as I’ve come to expect, but there’s nothing wrong with that, and it actually matched very well with some smoked chicken we were having. It went over quite well. I managed to squirrel away my last growler though: 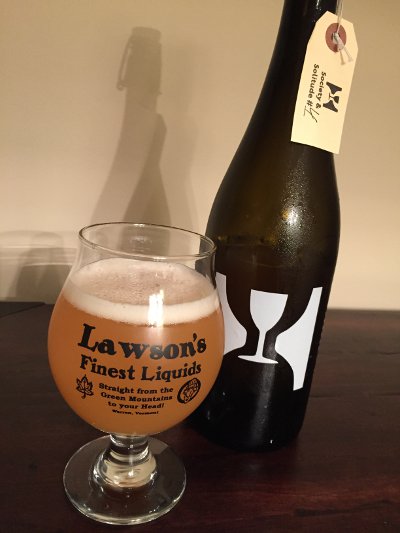 Hill Farmstead Society & Solitude #4 – Pours a cloudy, bright golden color with a finger of white, fluffy head. Smells amazing, huge citrus aromas, pure mango juice or something like that. Taste is very sweet, again with a massive blast of mango juice, well balanced finish, not bitter, but just perfectly balanced. Feels kinda like and amped up Susan, but even more fruity. Mouthfeel is well carbonated, smooth, medium bodied, and almost quaffable. Overall, what a surprise, HF hits it out of the park. Again. With a citrusy wonder. A-

Finally, this last one is a spoil from Operation Cheddar III, but I think you still want to know about it, right? 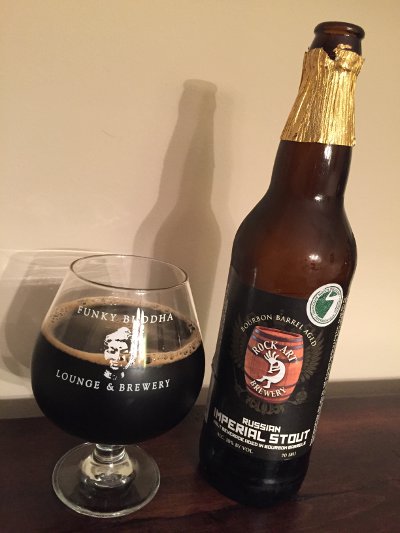 Rock Art Smuggler’s Notch Bourbon Barrel Aged Russian Imperial Stout – Smuggler’s Notch is a Vermont micro-distillery, so I took a flier on this one rather than going with the more traditional straight bourbon barrel approach. Pours a deep, dark brown, almost black color with a finger of tan head. Smells of bourbon, oak, and lots of vanilla, hints of roast and dark chocolate. Taste is surprisingly muted, some of that bourbon and oak, but not much, vanilla, and a big hit of hop bitterness towards the finish. As it warms, some roast comes out to play, and it becomes more expressive. Mouthfeel is well carbonated, full bodied, and while not dry, per say, it’s more attenuated than I’d expect. Overall, this isn’t top tier stuff, but it’s an interesting take on the style. B

Well, that was more involved than I thought it would be! Another successful incursion into Vermont, and there will be more. Oh yes.