So we know how much I enjoyed Lost Nation’s flagship Gose, a perfect summer beer. What happens when you take that, dry hop it with Citra, and add some grapefruit to the mix? You get The Wind, once a limited draft-only brew that they have recently started bottling. Tilt those windmills, we’ve got to deal with The Wind: 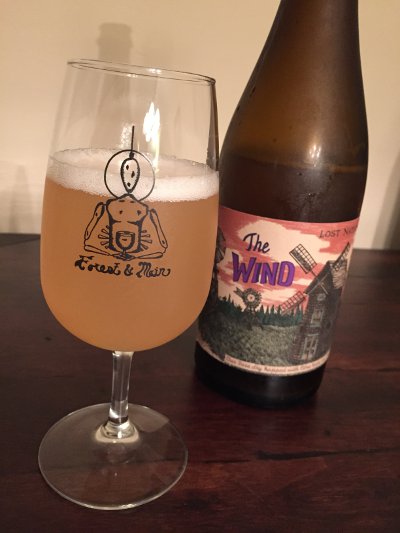 Lost Nation The Wind – Pours a cloudy straw yellow color with a finger or two of fluffy white head that resolves down to a small cap of head that has pretty good retention. Smells wonderful, that dry hopping coming through strong with citrus and floral notes, but the underlying brackish and spicy Gose character is still there and plays well with the hops. Taste starts off more Gose-like than the nose, sweet, salty, spicy, with a zesty, lemony, tartness emerging in the middle and intensifying through the finish. Mouthfeel is light bodied, well carbonated, tart, and relatively dry, making for a very quaffable glass. Definitely more intense and layered than the base Gose. Overall, I’m rating this higher but it’s hard to call this “better” than the base beer because it’s quite different, but it is more complex and intense while still being very well balanced. A-

Lost Nation has quickly emerged into a must-visit stop during Operation Cheddars. This represents that last of my Operation Cheddar III cache, but fear not, I stopped in again last week and restocked with a couple new ones. You will be seeing more from these guys in the near future.