The first time I heard of Crux Brewing was a couple of years ago when Jay from the on-again, off-again, and freshly back-in-action Beer Samizdat took a trip on the Bend, Oregon Brew Bus. He mentioned a couple of their hoppy brews, but the first one I managed to snatch up was this imperial stout aged in bourbon barrels. Brewed with black strap molasses, unspecified spices, rye, smoked wheat, and who knows what else, it sorta reminded me of a more barrel-forward version of The Abyss, which makes sense when I learned that Crux was started by Larry Sidor, the former brewer for Deschutes (and presumably the originator of the Abyss). Well, it appears that Sidor’s still got it, as this was quite good. Nice distinctive label (that I’m sure is a huge pain in the arse to apply), waxed cap, and a cork. Someone wanted to keep this genie secured in the bottle, but I managed to pry it loose. Eventually. 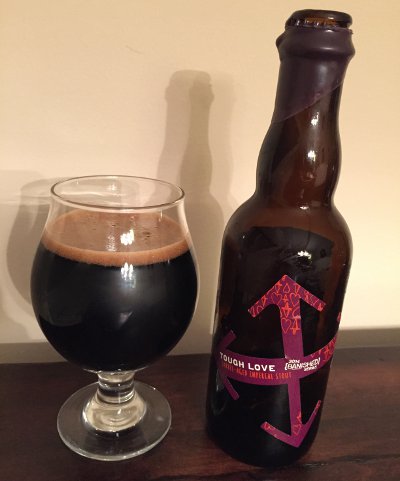 Crux Tough Love [Banished] – Pours a deep, very dark amberish color, almost black really, with half a finger of light brown head. Smells of caramel, molasses, vanilla, dark chocolate, oak, and hints of bourbon. Taste starts off with some rich caramel and toffee with oak, then that molasses kicks in, brown sugar, vanilla, hints of candied fruit, maybe a little chocolate, cinnamon?, plenty of boozy character in the finish. Mouthfeel is rich and creamy, but well carbonated, which helps with the viscous and thick body. A little boozy, but nothing excessive or unpleasant and would probably calm down after a few months in the cellar. The closest I can think of for this would be something like Berserker or Abyss… Overall, it’s a rock solid barrel aged RIS that has just enough personality to set it apart from the crowd, though it doesn’t quite take top honors. A-

Certainly a brewery to keep my eyes on. In the meantime, I’ll have to make do with this all this piddling Vermont beer from the just recently completed Operation Cheddar IV: Smoked Cheddar (look for a recap, um, soonish – I’m a little backed up in the reviews department). The horror!