Look at any crowd-sourced list of top beers in the world, and you’ll basically find an accounting of the best Double IPAs and Russian Imperial Stouts in the world. On Beer Advocate, you have to get to Fou’ Foune at #15 before you reach something that’s not a DIPA or RIS. Ratebeer isn’t quite as bad, with only 7 imperial stouts in the top 10. The commonality here is high alcohol, which generally means intensity, which generally makes more of an impression than a delicate, nuanced pilsener or something. Heck, I’m as guilty as anyone, and the A level archives of this blog are littered with high alcohol brews (though I do seem to have at least a little more variation in terms of style, even if there are plenty of DIPAs and Imperial Stouts). This is a drastic simplification for effect, of course, but the point is that beer nerds love them some high alcohol brews.

Which is why it’s kinda funny that Lost Nation doesn’t really make any of those. They’re from Vermont, so they do have some hoppy beers, but they tend to be lower alcohol IPAs like Lost Galaxy (which I’d probably term a straight up Americal Pale Ale, but still), clocking in at 4.8% ABV. Their flagship Gose hits the same ABV. Indeed, their highest ABV beer is the one we’re reviewing today, Lamoille Bretta, with a whopping 6% ABV. And yet, it’s a beautiful, flavorful beer, and while it might seem like Lost Nation is bucking a trend, it’s also something of a beer nerd trend. Session IPAs are all over the place these days (again, they’re kinda just APAs, but still) and Gose’s soaring popularity partly due to it’s easy drinking nature. Once Americans realized how much they could annoy their British friends by claiming that a 4.6% ABV beer was a session beer, it just took off even further. But seriously, it turns out that not every beer has to melt your face, and more and more people have been coming around to that notion. Revolutionary, I know.

Anywho, this is Lost Nation’s straight up Saison Lamoille that has been dosed with Brettanomyces and it’s a pretty damn good attempt: 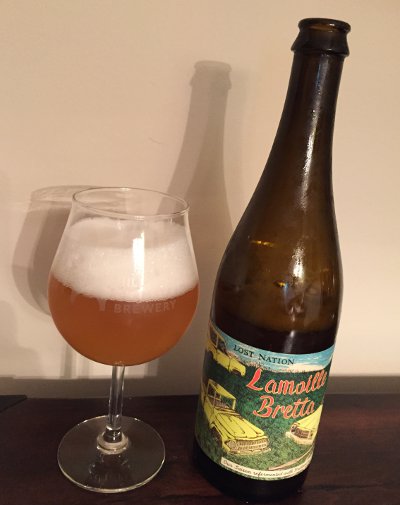 Lost Nation Lamoille Bretta – Cork nearly took off my hand, I hadn’t even finished undoing the cage when it exploded out of the bottle. Was worried about a gusher, but no, thankfully all was fine. Pours a nice yellow gold color with several fingers of fluffy, large bubbled head that sticks around for quite a while (I could see this coming and poured extra slow, so as to prevent a glass consisting mostly of head). Smells beautiful, starts off with dusty, musty farmhouse funk, with some more traditional spicy Belgian yeast, followed by a nice fruity kick. Taste hits that musty farmhouse funk early on, some earthiness, Belgian yeast spice, followed by some more fruity esters coming out to play, lightly tart fruit. Not hugely funky, but a well balanced amount. Mouthfeel is highly carbonated, effervescent, crisp, and very dry. Light to medium bodied, just enough to offset the massive amounts of carbonation. Overall, this is pretty special stuff, an improvement over the base, and something I need to try again. A-

This has been my favorite Lost Nation beer yet, and there’s sadly only one remaining (and even more sad, I already drank it! I will get to it soon enough). I’m excited to return there and purchase more of their gloriously low ABV beer (also, apparently some proper glassware, as they keep informing me on twitter).