The one brewery visit during Operation Chowder was Trillium, in downtown Boston, after which we stopped next door at a neat little oyster bar and beer purveyor called Row34. They have a pretty solid tap list, so obviously they cozied up to their neighbors for some exclusive suds. It turns out that, as Trillium describes it, their “walk-the-kegs-across-the-alley proximity” is quite convenient. To celebrate Row34’s one year anniversary last fall, Trillium brewed a hopped up Double IPA called Vicinity (get it?) I have it on good authority that it’s hopped primarily with Galaxy, though Citra and Columbus play a supporting role. It proved popular enough that they made it again and bottled it. Near as I can tell, this bottle is actually from the third batch, so it must be really popular. After tasting it, I believe I have found some support for this hypothesis, but I’ll say further observations are required (i.e. I want moar!) 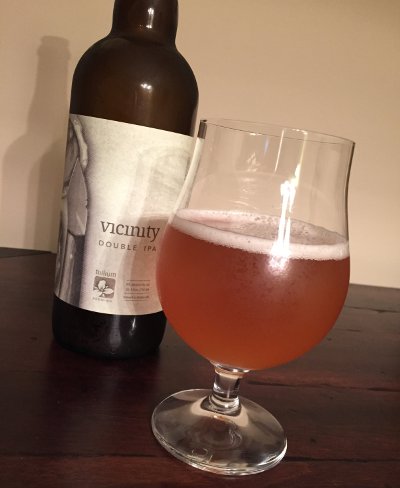 Trillium Vicinity Double IPA – Pours a hazy golden orange color with a finger of white, fluffy head. Smells amazing, huge citrus aromas, mangoes and tropical fruit galore, sweet, almost candied fruit, just a fabulous nose. Taste is a little more dank than the nose would have you believe, lots of fruity citrus and resinous pine, some crystal malt providing a nice background and caramel interplay with the piney hops, nice dry bitterness in the finish. Mouthfeel is well carbonated, medium bodied, and a little dry. Overall, this is a fantastic little number with a breathtaking nose (seeing a theme here with Trillium and aroma) and a rockin body. Er, that sounded hotter than intended, but then, well, yeah. It’s pretty hot (in a metaphorical sense, not in a boozy or spicy sense, jeeze, what’s wrong with me, how am I still writing here, do people even read these tasting notes, I don’t think they do, I’m using a lot of commas here when they should really be periods but I’m pretty sure no one’s reading so why should I care, the beer’s really good, you should try it if you get the chance. A-

So basically, if you find yourself in Boston, head over to Congress street, wait in line to get some growlers of Trillium beer, then stop in at Row34 for some refreshments. You will be a happy camper.