Remember all the paranoia about Satanic cults back in the 80s? This manifested in many ways, but one of the coolest is something called backmasking. That’s when you can discover a hidden message if you play a recording backwards, usually something Satanic or generally meant to corrupt the youth of the day. The Beatles famously popularized the notion of backmasked music, but thanks to human beings’ predilection for pareidolia (i.e. finding meaning in something that is random, like shapes in the clouds), rumors of hidden messages became rampant in the 60s and 70s (the Beatles’ good natured exploration came back to plague them later with rumors of Paul’s death).

None of this was new, of course. Thomas Edison noticed the phenomenon almost immediately after inventing the phonograph, and even the Satanic connection dates all the way back to 1913, when Aleister Crowley wrote a book that advised those who were interested in black magic to “learn how to think and speak backwards.” Along with related paranoia surrounding subliminal messaging, backmasking and satanism peaked in the 80s and has subsided as it’s been proven that such techniques aren’t exactly effective. But it’s fun to go back and read all those irrational fears.

The advent of digital recording technology has lead to a bit of a resurgence in backmasking, as it’s a lot easier to accomplish now. Artists being artists, they’ve always fought against the false accusations by using backmasking for humorous or satiric effect. For instance, there’s a Mindless Self Indulgence song called Backmask which, when played forward, has all the nasty lyrics like “go kill yourself”, but when played backwards, the hidden message is revealed: a soothing female voice tells the listener to be good, “Don’t stay out too late”, “Get dressed for church” and so on. Irony! (For the record, it’s a clever idea, but the song ain’t exactly great.)

So this beer is an ode to that Satanic scourge, with a perfectly executed label. Very much fitting with Three Floyds’ brand. Oh. Oh no, I’m talking about branding now. What is wrong with me? Please forgive me, dear reader, I deal with this stuff for my day job sometimes. I try not to let it bleed through to the beer blog and… why are you looking at me like that? Stop judging me! Beer. The beer! So this is a relatively straightforward Oatmeal Stout that is variously reported as 6% or 8% ABV, depending on who you ask. I’ll assume 8% because that’s what Three Floyds’ website sez, even if their labels frustratingly omit ABV for some unfathomable reason.

I was going to try and unearth some Satanic messages in this beer, but decided that “drinking beer backwards” would not be very fun (and apparently peeing doesn’t count) so I’ll have to lead it as an exercise for the reader, if you’re so inclined. 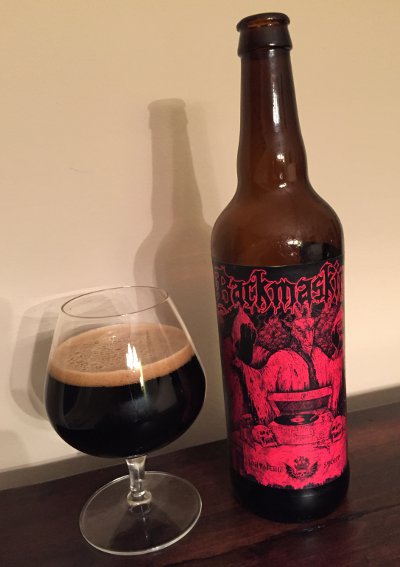 Three Floyds BackMasking – Pours a deep black color with a finger of tan head that has decent retention and leaves a little lacing as I drink. Smells sweet, dark malts, but not super roasty, not quite caramel or toffee either, but closer to those than your typical stout. Taste is where the roasty hell-like notes come in to play, brimstone and the like, but there’s lots of other things going on. Not as sweet as the nose would imply, but it’s got notes of caramel and vanilla, some faint piney hops and a little hop bitterness towards the finish. As it warms, the hops come out a little more. Mouthfeel is medium to full bodied, thinner than expected but still pretty substantial, well attenuated, faintly satanic, plenty of carbonation and a silky feel. Overall, it’s a rock solid moderate-ABV stout, well worth seeking out. B+ would try again.

As always, Three Floyds is worth the stretch and they have great brandin… dammit, I’m doing it again. Leave me alone, I learned it from watching you! What? I’m… sorry, I don’t know what is going on right now.