While the origins of Bourbon are not well documented, there are a few legends and claims that are frequently made. One credits an early distiller by the name of Jacob Spears with being the first to call his product “Bourbon whiskey” (named after the location of his 1790 distillery: Bourbon County, Kentucky). This sort of obscure historical reference would normally be enough for a brewer to get all hot and bothered and brew a Bourbon barrel aged beer, but Adam Avery’s sister discovered this tidbit while doing a genealogy project and it turns out that Jacob Spears is their 6th Great Grand Uncle.

As a fan of Bourbon barrel aged imperial stouts, I’ve been on the lookout for this beer for a while, and as luck would have it, I snagged a bottle late last year not realizing that it was a 2013 vintage. Then, when the new 2015 batch came rolling around, I started seeing it everywhere and obviously I cannot resist such temptation. It was fate, and I knew I needed to drink both side-by-side. Of course, both are 16.5+% ABV, so it’s important to find a night where I could pace myself. So here we are, comparing two vintages of Uncy Jacob’s Stout: 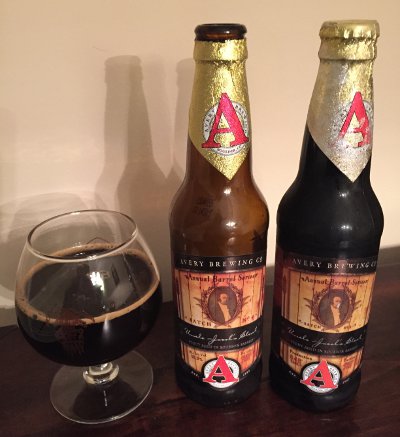 Avery Uncle Jacob’s Stout (2015 Vintage) – Pours an almost cloudy (hard to tell, since it’s so dark) pitch black color color with a finger of brown head. Smells of dark, roasted malts, a little caramel, bourbon, oak and vanilla, maybe a faint hint of coffee. Taste is all rich caramel, bourbon, oak, and vanilla, faint hints of dark malt in the background, an some booze in the finish. Mouthfeel is full bodied, rich, and chewy, surprisingly well carbonated, but still a little sticky in the finish. Thick and viscous, I’m guessing a relatively low attenuation here. A pleasant amount of boozy heat. Overall, it’s a pretty fantastic Bourbon Barrel Aged Imperial Stout, worth seeking out. A low A

Avery Uncle Jacob’s Stout (2013 Vintage) – Looks pretty much the same, though I guess it’s a clearer looking beer, even if that doesn’t really matter because it’s so dark. Smells much more of bourbon and oak, a little caramel and vanilla, brown sugar with an almost fruity aroma. Taste is similar to the 2015, but it again features a new brown sugary molasses type of character and less in the way of dark roasted malts. It feels a little more sweet and a little less boozy. Mouthfeel is the same – full bodied, rich, and chewy, well carbonated, a little sticky. Perhaps not quite as thick, though it’s still a pretty viscous beer. The booze is a little more tame here as well. Overall, it’s another fantastic BBA stout, a little sweeter and more integrated than the 2015. Just a tad too sweet though, so I’d go with 2015, though they’re very close. A high A-

So there you have it, a beer I’ll totally get every year if I luck into it at Whole Foods like I did this year (while I had given up beer for a while, no less). It is certainly knocking at the top tier door, even if it isn’t quite there just yet. But you never know. I gave Parabola an A- the first time I had that, and now it’s an A+ candidate (yes, this is a thing, I should really get on that, seeing as though I have not awarded an A+ in, like, 2 years).