Founded in 1995, Anchorage, Alaska’s Midnight Sun Brewing Company was the brainchild of Mark Staples, a former computer nut who claims he became “obsessed with beer”. Sounds familiar. While perhaps not a pioneering giant like Anchor or Sierra Nevada, 1995 was pretty early on for American craft beer (for instance, that was a year before the infamous class of 1996, which includes Victory, Stone, and Dogfish Head), and they were making this barrel aged barleywine pretty early on. At least as of the year 2000, if this Michael Jackson article is to be believed. He was part of a blind taste test and had this ranked third:

Arctic Devil is an extraordinarily creamy barley wine, aged for six months in a red wine barrel and its unusual flavours were deemed excessively rich and lacking in hop balance by some of the judges. Not a typical barley wine, but I gave it points for individuality.

How things have changed. As barrel aged barleywines go, this is actually a pretty good example. It’s not typical, but only in that it’s better than most.

He mentions that it was aged in Red Wine barrels, which could have something to do with the perceived atypicality (is that a word? It is now.) These days, the label sez that the beer is aged in Bourbon Oak Barrels, though the brewery also claims they’ve blended the spawn of diverse barrels, ranging from wine and port to bourbon barrels (seems heavy on the bourbon to me, which perhaps yields something more typical than a red wine barrel). On the other hand, clocking in at 20 IBUs, this definitely is on the extreme low end of the bitterness spectrum for barleywines (even if it didn’t feel that way to me). Whatever the case, this is a pretty spectacular barleywine, well worth seeking out: 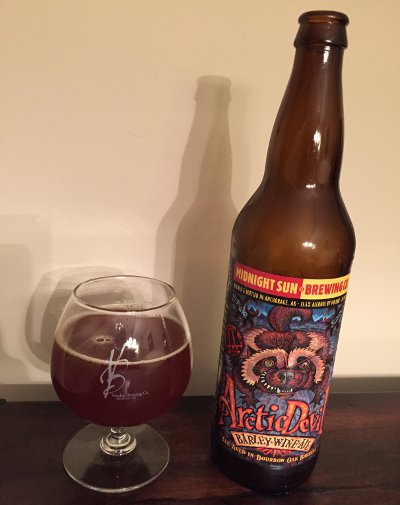 Midnight Sun Arctic Devil Barley Wine – Pours a murky brown color with a cap of tan head. Smells fantastic, candied fruits, toffee, caramel, vanilla, oak, and bourbon. Taste has rich caramel, toffee, a hint of dark fruits, oak and vanilla, bourbon, finishing with a touch of bitterness that is offset by some boozy bourbon (surprising, given the low IBUs – this seems very well balanced). Mouthfeel is full bodied, rich, and chewy, a hint of boozy heat, well carbonated, a little sticky in the finish. Feels along the lines of §ucaba or Bourbon County Barleywine, which is good company to be in. Overall, this is a delicious, superbly balanced, top tier barleywine. A

Midnight Sun continues to impress. I will be seeking out more from them, post haste! I should also be looking into some other top tier barleywines that I’ve not managed to tick just yet. Patience, friends, all in good time.