The case against Portland, Oregon’s Hair of the Dog basically comes down to inconsistency across batches, especially when it comes to carbonation. That has certainly been the case in my (admittedly limited) experience, though I should note that I’m especially sensitive to carbonation issues. It’s clear HotD makes good beer, and while consistency is admirable, inconsistency can be charming if you do it right.

Bottle conditioning of high alcohol beers can be uneven, and to HotD’s credit, they will often reduce the price of their limited beers if they’re having a lot of carbonation issues. It’s also possible that bottles will get better over time, and while I am carbonation-challenged, the beers I’ve had from them seem like they’d do well in the cellar. Brewer Alan Sprints has commented on this in the past:

Each batch is a moment in time, unique, like we are. Some of the batches that I have not been happy with have turned into the most popular ones after a few years. Beer is more than bubbles.

Hard to argue with that. Adam was the first beer they made at Hair of the Dog, a recreation of the historical Old Ale style, and from what I’ve seen, it certainly rivals the best of them (carbonation or no): 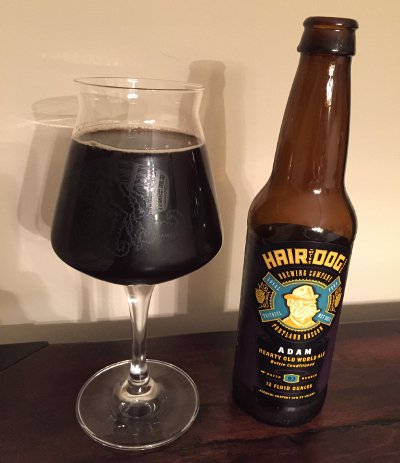 Hair of the Dog Adam – Pours a very dark brown color with just a cap of slow forming head that quickly resolves into a ring around the edge of the glass. Carbonation seems present, but clearly low. Smells great, lots of brown sugar and molasses, candy, dark fruits, cherries and the like. Taste is malt forward, brown sugar and molasses again, more of a crystal malt feel, less in the way of fruit, maybe a hint of chocolate. Mouthfeel is full bodied and viscous, minimal carbonation (not completely flat, but still a little low for my tastes – keep in mind that I’m generally sensitive to carbonation issues), a hint of boozy heat. Overall, this is very nice, but once again, Hair of the Dog’s infamous low carbonation tempers my enthusiasm for what would otherwise be a fabulous beer (even if it wasn’t as bad as last time). But at least there was some this time, and by the end of the bottle, I was quite pleased. I’ll give it a B+ for now, but this could easily enter A- or even A realms if there were just a little more carbonation…

I’d be willing to take a few more fliers on this beer in the hopes of getting one that’s better carbonated, and naturally, I’d absolutely love to score some Adam from the Wood (though I’d guess the higher ABV and aging process would make carbonation issues more likely, but then, I might be more amenable to that in a barrel aged beer…) Also, Old Ales are another style that I seem to mostly enjoy whenever I find one, so I should probably seek out some more (I’m coming for you, BB4D!)