In a world saturated in hops and IPAs, I have to pause at the presumption of naming a beer “Just Outstanding”. It is apparently named after a local mountain bike trail, but it still serves to ratchet expectations, perhaps unfairly (one wonders if know-it-all biking nerds finish the trail and tweet their disappointment as they break all sorts of traffic laws and cause accidents while cycling home). It doesn’t help that Kern River is the brewer that makes one of the most coveted Citra DIPAs in the world either. If this more regularly available little brother beer turns out to be only moderately outstanding, it might be a letdown. The less trendy (but delicious nonetheless) Simcoe and Amarillo hops will need to step up big time. On the other hand, there are a lot of outstanding IPAs out there, and this manages to clear that bar pretty well, even if it ain’t the end all and be all: 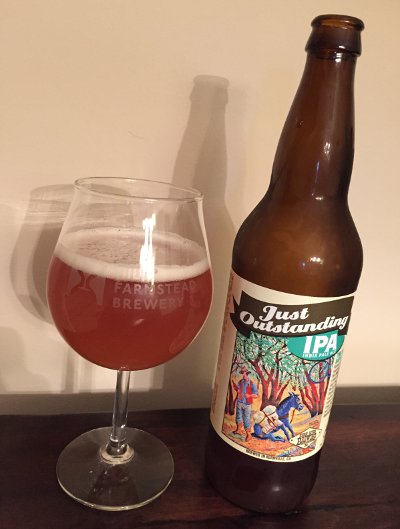 Kern River Just Outstanding IPA – Pours a pale golden orange color with a finger of white head and plenty of lacing as I drink. Smells fantastic, lots of bright citrus, tropical fruits, mangoes, grapefruit, and the like. Taste follows the nose, lots of bright citrus, a little more in the way of grapefruit, maybe a little pine sneaking in, with a clean, bitter finish. Mouthfeel is crisp and clean, light bodied, well carbonated, quaffable, finishing dry. Matches well with food and I’ll be damned if this bottle didn’t just disappear on me. Where’d those 22 ounces go so fast? Overall, this is an expertly crafted IPA, delicious and well balanced. I can’t find a date on the bottle, but it’s clearly a fresh bottle (none of the dank, piny, or catty notes that emerge when a beer like this sits around for a while). While it is perhaps not perfect or worth going absolutely crazy over, it is, in fact, outstanding. A-

Since the Citra is only available occasionally via a lottery system, it’s highly doubtful I’ll ever get a taste, but I would be quite interested to get my grubby little hands on some of that stuff. In the meantime, I’ll have to be on the lookout for more of their stuff.