I like puns as much as the next fella, hell I’ll even chuckle at the most overused of beer puns: the hop pun. But even I have to question the wisdom of naming your beer with a pun that refers to one of the most devastating pandemics in human history. Welcome to the Raccoon Lodge & Brewpub, here’s your bottled pestilence! On the other hand, it is a beer soured with bacteria, so there is a certain sense of propriety, I guess. Consider my question withdrawn.

I’ve had the occasional misfire from Cascade, and at these prices, those are not pleasant affairs (even when the beer is ultimately not all that bad), but they’re always interesting, and when they’re on, they’re really on. I’ve had my eye on this one for a while, in part because I initially thought it wasn’t a sour. It’s a blend of spiced double porters that were aged in Bourbon and wine barrels for 18 months before aging on dates and spices for up to an additional 12 months. Nothing in there screams sour. Except for the part on the label that sez it’s a Northwest Style Sour Ale. That’s kinda a dead giveaway. I am, as has been amply established, the worst. Anywho, bourbon barrels aren’t typically used for sours, and I’ve found that when they are, the bourbon gets lost behind the sourness (with the notable exception of Cuvée De Tomme). This one falls somewhere inbetween…

Our opponent is running a black deck, so watch out for plague rats and gird your buboes, because we’re going in for a closer look at this Bourbonic Plague: 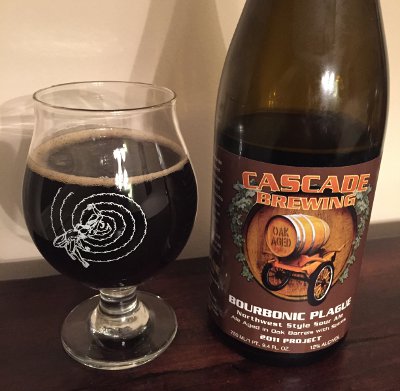 Cascade Bourbonic Plague – Pours a dark brown color with a finger of light tan head that quicky fizzes down to a ring around the edge of the glass. Smells funky, a little sour, but you get some spice and vanilla (almost like a coke), oak, maybe some vinous fruit, and something deeper and darker lurking in the background. Taste is very sweet, some of that vinous fruit, a nice sour punch, rich dark malts (but not roasty at all), spice and vanilla (again with the almost coca cola character, like if coke was sour? Maybe not the best description, but there’s something to it), and some booze, maybe even actual bourbon (not Cuvée De Tomme levels, but it’s there). Mouthfeel is full bodied and rich, a little heavy and acidic, nice booze factor. Intense, complex, and interesting, it’s a sipper for sure, and probably should be shared. Overall, a fascinating piece of work, not sure I’ve had anything quite like it. B+ but certainly worth seeking out.

Yet another interesting winner from Cascade, and at least one more in the pipeline sometime in the near future. Not to mention lots of their beers that remain unexplored territory for us… territory we’ll surely enjoy charting.