I was pleasantly surprised and quite impressed with Stone’s phenomenal barrel aged imperial stout, Fyodor’s Classic, so I jumped at the opportunity to snag more from their barrel aging program. Then again, not long ago, I tried the Bourbon Barrel Aged Arrogant Bastard and found it to be rather disappointing. It was fine, I guess, but the hops and the barrel treatment sorta clashed and almost canceled each other out.

So I was a little anxious about this beer, which is Double Bastard aged in Bourbon Barrels for 5 months. They call them first-use barrels, though that’s probably more accurately referred to as first use for beer, as the actual first use was obviously for bourbon. It’s called Southern Charred because bourbon is always aged in charred new oak, and previous iterations of this beer actually incorporated a small proportion of beer aged in charred new oak as well (the 2013 vintage was 51% bourbon barrel, 8% charred American oak barrel, and 41% second-use bourbon barrel, and the aging times were 10-13 months). The 2014 release that I have here is 100% bourbon barrel aged, so I guess that whole blending thing was more trouble than it was worth (or maybe the 2013 batch was just a lot different). Whatever the case, I’m happy to report that these Quingenti Millilitre (500 ml) series of barrel aged Stone beers are legit: 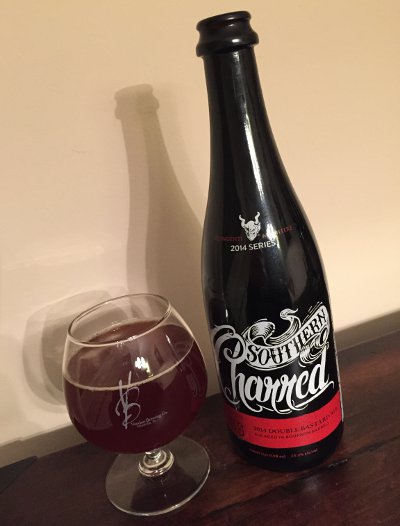 Stone Southern Charred – Pours a murky amber brown color (rich mahogany) with half a finger of quickly disappearing light tan head. Smells of rich, caramelized dark fruits, raisins, plums, molasses, bourbon, oak, and vanilla. Taste follows the nose, very sweet up front, those fruits coming to the fore, rich caramel, vanilla, and oak in the middle, with a boozy bourbon finish where the hop bitterness also hits like a hammer to balance out the sweetness. Mouthfeel is full bodied, rich, and chewy, lowish and appropriate carbonation. A sipper, but quite nice and well balanced for the intensity level. Overall, it’s rock solid, barleywinish stuff. A-

The 2015 batch of Fyodor’s Classic was just bottled, so rev up your FedEx accounts. That one is worth seeking out. Otherwise, I’ll most certainly be keeping my eyes open for more Quingenti Millilitre beers (would really like to try the BA Old Guardian, but given the quality so far, I’d try just about anything) and keeping my fingers crossed that Stone will really ramp up their barrel aging program so these aren’t quite so difficult to find…