One of the many things I love about Fifty Fifty’s Eclipse series of beers is that it offers me the opportunity to wax philosophic on all manner of barrel aging minutiae. Of course, my ramblings are almost completely unsubstantiated and speculative, but hey, it’s fun. By taking the same base beer and aging it in a variety of barrels, as Eclipse does, I feel like you can start to form some idea of what each type of barrel contributes.

One of the things I’ve always wondered about is the difference between a young barrel (like, say, Rittenhouse Rye), a medium aged barrel (like Elijah Craig 12), and a really, really old barrel… like the most recent Eclipse I tried, aged in 23 year old Evan Williams barrels. There are many other variables, but my experience so far seems to have confirmed my assumption that younger barrels contribute more oak than older barrels, and this 23 year old barrel seems to really cement that feeling. Of course, there’s still plenty of bourbon character in the finished beer, but the rich, oaky character is less pronounced.

It makes me wonder about some other beers I’ve had as well. I remember being disappointed by Stillwater’s The Tale Of Van Winkle, a Belgian Strong Dark aged in 20 year old Pappy Van Winkle barrels, but I blamed that entirely on the base beer (high attenuation and moderate ABV don’t usually match up well) when it could very well have been that the 20 year old barrel was spent and only contributed that precious, precious Van Winkle juice without incorporating any depth from the barrel itself. Probably a little of both contributed to the boozy, unbalanced result, but it’s still interesting.

On the other hand, I suspect you could age the beer a lot longer in the barrel, which might end up yielding more complexity in the long run. I’ve never had Bourbon County Rare and surely its reputation is partially based on its rarity, but it also did spend a whole 2 years in 23 year old Pappy barrels. The other thought: perhaps these beers can age better in the bottle, as the higher bourbon content integrates and mellows out over time. Eclipse beers all spend a similar amount of time in the barrels, about 6 months, which is fantastic, because I can really dig in and nerd out on the difference between this Evan Williams 23 variant and the Evan Williams single barrel version (a 9-10 year old bourbon). I’d be really curious to see how this bottle ages (alas, I didn’t manage to acquire a second bottle for that purpose)…

The other interesting thing about this year’s crop of Eclipse beers is that they seem to be higher alcohol than some of the previous batches (11.9% vs 9.5%), which is certainly fine by me, but does add a little variability between vintages. Alright, I guess that’s enough wanking, let’s get to the beer: 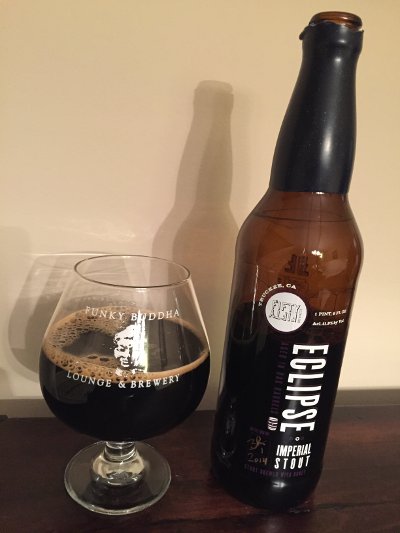 FiftyFifty Imperial Eclipse Stout – Evan Williams (23 Year) – Pours black as night with half a finger of light brown head that fades at a moderate pace. Smells lightly of roasted malt, char, and some rich caramel and lots of bourbon. Taste is sweet, with some complexity in the form of roast hitting in the middle, along with a heaping helping of boozy bourbon and some rich caramel hitting towards the finish. Mouthfeel is full bodied with moderate carbonation and plenty of boozy bourbon heat. The balance isn’t quite the same as other Eclipse variants, a little more bourbon, not much oak – perhaps a function of the rather old barrel (perhaps a lot of residual bourbon had soaked into the barrel, which was pretty well spent over 23 years). Overall, this is quite an interesting entry in the Eclipse series, very good, but very different than the other entries. Certainly worthy, and I absolutely love the opportunity to nerd out on the older barrel treatment, but it’s not my favorite treatment. A low A-

I managed to put together enough sheckels to go in on a few other variants of this stuff, and have been considering doing a tasting with some friends, so we’ll see how that plays out. In the meantime, I’m sure some won’t survive the wait, so look for some additional variants (in particular, I’m looking forward to the Four Roses and Woodford Reserve variants)…