I’ve been marveling at Fantôme beers for years now, how is it that I’ve never heard of the story behind its name? Fantôme plainly translates to “ghost”, but it’s actually a specific reference. According to legend, the ghost in question is that of Countess Berthe de La Roche, who was murdered on her wedding night and allegedly haunts the ruins of her home to this day. The full story is pretty wild.

It seems the Countess’ wealthy father organized a tournament in order to find a man worthy of his daughter (and sole heir to his inheritance). Enter the Count of Montaigu, a knight famed for his jousting skills. He was already betrothed to Countess Alix de Salm, but abandoned her in favor of the more wealthy Countess. Due to his well-known prowess, there was only one last-minute challenger, a much smaller man who boasted little in the way of strength or even equipment. But this small rival was quick and nimble, and used those qualities to defeat his opponent (and this ain’t no Disney tale, “defeat” in this case means the Count’s throat was cut). And so the smaller rival won the affections of the Countess and were married that evening. In the morning, both were found dead. It turns out that the small rival was actually Countess Alix de Salm. Infuriated by her fiance’s betrayal, she made a deal with the devil, disguised herself as a man, and took her revenge on both her former fiance and the object of his desire. Hell hath no fury like a woman scorned. Or George R.R. Martin, because this is some Song of Ice and Fire shit right here.

Because it’s always hard to tell what makes one of these different from another, this particular Fantôme is made with dandelion flowers and the typical melange of spices and funky yeasts. The label sez none of that, but it does feature some goober blowing the leaves off a dandelion so I’m pretty sure that’s right. Let’s see if this is worthy of the Countess’ name: 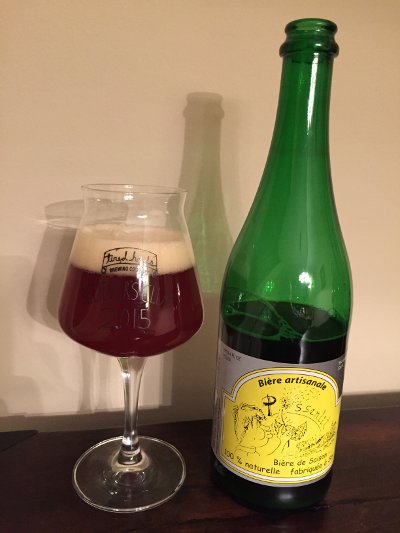 Fantôme Pissenlit – Pours a murky, dark orange/amber with finger of off-white head. Smells of grassy, almost vegetal hops (or perhaps that’s just the dandelions) at first, then you get a little of that more traditional musky Belgian yeast, maybe a hint of dried fruit, raisins and the like. Taste is sweet, with an uncommon but only slightly funky middle, unidentifiable spices, vegetal flavors (again, presumably the dandelions coming through), raisins, dried fruit, and just faint hints of tartness towards the finish. It’s weird, some sips feel much different than others, emphasizing one aspect of the flavor over another. I guess this keeps the sips coming though! Mouthfeel is medium bodied, moderate carbonation, slightly spicy, a little funky note, slightly sticky at times. Overall, gone are the days of the Smoketôme, but I feel like the funk factor has gone down considerably as well. Perhaps this will reassert itself in the near future. I certainly enjoyed this for what it was though and give it a mild B+

I also snagged a regular Fantôme, my first since the famed Smoketômes of yore (in fact, I think I might even still have a Smoketôme down in the cellar somewhere), so I’m excited to see how that one’s doing.