I thought I had missed out on this Bourbon County variant that people are losing their minds over. Back when Goose Island started doing Bourbon County variants, there was a Vanilla version that has been highly sought after ever since (despite apparently having fallen off a cliff). This new release has also been turning some heads and my local beermonger missed out on a case and I was too apathetic to go hunting for it until a friend mentioned that a local beeratorium was tapping a keg. Peer pressure, it gets things done.

The difference between this and the 2010 variant? Those fine Chicagoan Geese Cellarmen used Rye barrels instead of Bourbon, and even incorporated some “rye spice” into the base beer recipe (not sure if that’s some rye-derived spice or if they’re talking about stuff like fennel or cardamom). The vanilla beans are different as well, using a 70/30 split of Madagascar and Mexican vanilla.

For some unfathomable reason, the word vanilla is often used to indicate that something is bland or boring, but vanilla is one of my favorite flavors. There’s a reason it’s often used as a base for other flavors, and when you combine the intensity of something like BCBS with vanilla, well, the results are pretty impressive. Many thanks to Danur for holding my beer for this rather pedestrian picture. It was pretty damn crowded. Let’s get to it: 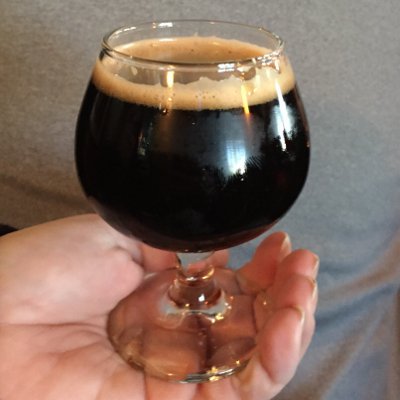 Bourbon County Vanilla Rye – Yep, looks like regular ol BCBS, pitch black with a tan head (maybe the head is lighter in color in this version?) Smells great, that vanilla comes through strong, a great complement to the bourbon and oak, but I’m also getting a sorta ice cream cone feeling mixed with a little roasty malt, chocolate, and even some coffee. Taste has that BCBS base awesomeness, lots of caramel, oak, and bourbon, plenty of booze too, but the vanilla really comes through and brings out some of the roasty and chocolatey elements, perhaps even a little coffee-like flavor. It doesn’t feel quite as huge as regular BCBS, but as a result the complexity rises, yielding new tastes on each sip. I usually hate it when people pepper their tasting notes with ridiculous comparisons, but here I go: Pizzelles (the ones my mom makes, without anise), chocolate covered coconut, malt balls, sugar cookies, I feel like I’m drinking a bakery. Mouthfeel is full bodied, rich, and velvety, with ample carbonation and a pleasant boozy bite, not quite the beast of regular BCBS, but that’s a high bar to clear. Overall, this is a fantastically complex, tasty treat. Being boring, I probably still prefer regular ol’ BCBS, but I’m weird that way – this is a superb beer worth seeking out. A

Of the variants of BCBS, this is my favorite (with special mention to Bourbon County Barleywine, which is it’s own animal) so far. Of course, I’ve not had Rare or the original vanilla or Proprietor’s Reserve, so take that with a shaker of iodized salt, and it’s not like I won’t be seeking out new variants next year. I’m just a sucker for Bourbon County anything.