In San Francisco, they grow dogs right out of the ground like those orcs from Lord of the Rings. This beer is named after these “Dogpatches”, which are really only present in one specific neighborhood because ewwww, Doggie Orcs. I… don’t know where the hell I’m taking this, so I’ll just note that no dogs were grown or harmed in the brewing of this beer. To my knowledge. California Rainier cherries, on the other hand, were slaughtered by the bushel. Cherries come in bushels, right? Jeeze, what is wrong with me tonight? I’m the worst.

Seriously though, this is one of Almanac’s standard Farm to Barrel offerings where they incorporate uber-fresh locally sourced fruits into their beers which are then aged in old (presumably also somewhat local) wine barrels with their, yes, Dogpatch yeast. The Dogpatch is actually a real neighborhood in San Francisco, and I’m pretty sure they don’t grow dogs there, orc-style. However, there is no definitive explanation for name, so let’s not rule it out just yet. Instead, let’s just drink some of this mighty fine beer: 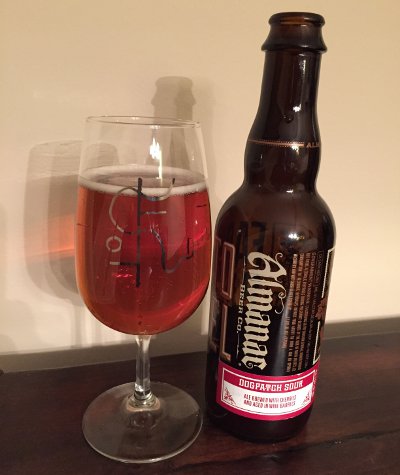 Almanac Dogpatch Sour – Pours a beautiful, clear golden orange color with a finger of white head. Smells very funky, lots of musty barnyard and a little in the way of cherries and tart fruit. Taste starts of sweet, with some oak kicking in towards the middle, as well as the fruit, sour cherries and tart fruit, with a more intense, puckering sourness picking up in the finish. Mouthfeel is medium bodied, well carbonated, relatively dry but also quite acidic. Overall, a rather nice sour beer, complex but approachable. A-

Almanac is one of those quietly awesome breweries that probably deserves more acclaim than they get. Seek these out, I know I will continue to do so. I already have something Called Devil’s Advocate, billed as a hoppy sour ale… which has actually never been something that completely worked for me, but if anyone can do it, I’m thinking these folks can…