Neshaminy Creek has been a welcome addition to the local Philly brewing scene, producing solid beers in all sorts of styles. Nothing genuinely groundbreaking, to be sure, but they’ve got a nice base IPA, a good tripel, and some decent German inspired beers like their Hefeweizen or Dunk’s Ferry Dunkelweizen, not to mention my favorite of their beers, Punkel Dunkel (currently called Punkless Dunkel, due to a trademark dispute) a pumpkin weizenbock. Well, now I think I’ve got a new favorite. Jam packed with Apollo, Newport, Simcoe, Topaz, and Citra hops, The Shape of Hops to Come is a potent look at trendy new hops. I have a passing familiarity with Apollo and Topaz, Citra and Simcoe are some of my favorite hops, and I’ve honestly not even heard of Newport hops. That being said, it’s nice to see a local brewery branching out and really hitting it out of the park with this rock solid DIPA. Really, the only thing that’s holding this particular can back is that it’s higher ABV (at 9.5$ ABV) is slightly too high… but it’s still one of the best local DIPAs (outside of Tired Hands, of course): 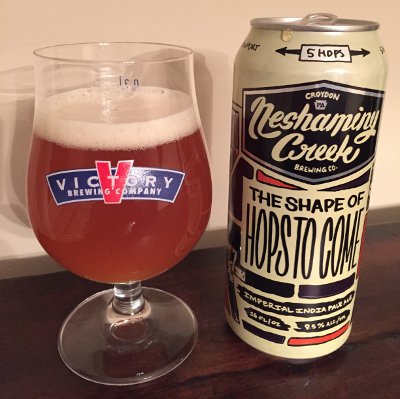 Neshaminy Creek The Shape Of Hops To Come – Pours a deep, dark orange color with a finger of white head that leaves plenty of lacing as I drink. Great nose, with lots of sweet citrus and dank pine hops. Taste hits hard with that dank, resinous pine character up front, lightened by some citrus in the middle, and a little booze in the bitter finish. Mouthfeel is well carbonated, medium bodied, boozy (definitely some belly warming going on as I drink), and a little sticky. The only thing really holding this back for me is that it’s a little too boozy, but it still works really well. Overall, this is an excellent DIPA and a welcome addition to our local scene. A high A-

Supposedly, an earlier batch clicked in at only 8.5% ABV, which sounds almost perfect to me at this point. A slightly less boozy version of this beer would be local royalty. As it is now, it’s still pretty damn popular. Pick up a can now while you can. Totally worth it.