Monomoy Island is located near Cisco Brewing’s home base of Nantucket, and while it once sported an active community, it has long been dormant. It no longer has any human residents, no electricity, and no paved roads. The only reminder that the island was once populated is the decommissioned old lighthouse. And this beer, named it it’s honor. I don’t know if these islanders were famous for their cherries, but I bet they liked cherries a whole lot. I mean, who doesn’t?

We all know that I’ve got a little woody over Cisco’s The Woods series of sour beers. They’re seriously some fantastic stuff, well worth seeking out (despite their wallet lightening abilities), and this beer, a 2 year old Flanders red aged in wine barrels that got a nice, 10 month long dose of cherries, is no exception. 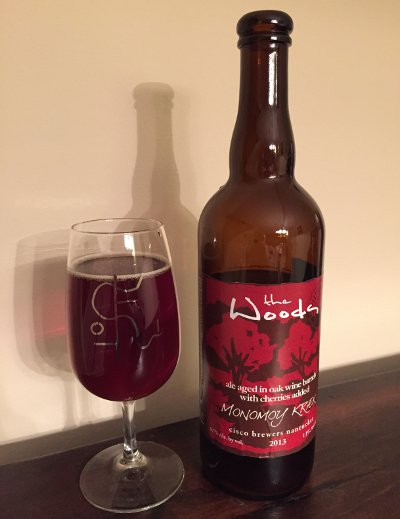 Cisco Monomoy Kriek – Pours a very pretty, clear amber color with a finger of white head that quickly resolves into a ring around the edge of the glass. Smells great, cherries, vinous fruit, a little oak and vanilla, that twang that indicates sourness. Taste starts with rich malt, oak and vanilla, followed by tart fruit, cherries, vinous fruit, vinegar, and finishing with a biting sourness. Mouthfeel is decently carbonated, medium bodied, some vinegary acidity, but very well balanced. Overall, this is a fantastic sour beer, continuing a nice streak from The Woods series of beers… A-

Another winner from The Woods, making me wish that I could even try that Cranberry sour I recently saw on the shelves. I may need to check that out sometime, if I see it again.