More semi-local PA bangers have been showing up in the Philly area, including these ShawneeCraft fellas. I’ve heard nebulous mutterings of them, but on a recent beer run, I spied a few bottles in the wild that sounded intriguing. One was a Bourbon Barrel Aged Porter (sold!), and then there’s this thing, a Belgian Witbier fermented with raspberries and aged in oak barrels. It’s actually a blend of the barrel aged portion and some fresh beer, though the percentages aren’t specified. Regardless, this is my kinda ambitious from a relatively new brewery, so let’s check it out: 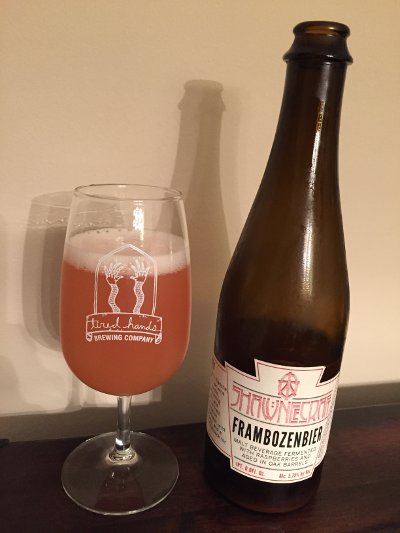 ShawneeCraft Frambozenbier – Pours a murky but radiant light orange, maybe peachy color with a finger of fluffy white head. Smells quite strongly of tart raspberry and pungent funk, with some oak and vanilla doing its thing, actually a very pleasant nose. Taste has a sharp sourness to it, lots of intense, tart fruit, raspberries, cherries and the like, and plenty of oak. Mouthfeel is highly carbonated, crisp, effervescent, very little stickiness, but a fair amount of acidity. Overall, it’s an intense little sour, packs a punch, but also complex and actually rather delicious. Another borderline case, but I’ll stick with a high B+

A very promising start, and something I hope to revisit. As mentioned above, I also snagged a bottle of the Bourbon Barrel Porter, so keep an eye out for that review…