Midnight Sun has some notoriety in beer nerd circles due to a few of their beers showing up on the pretty ridiculous White Whale list. So they had a pretty good run at one point, and while I’m pretty sure I’ll never get to try Midnight Sun M (and at this point, 5 years later, that’s probably a good thing), I was interested enough to check out some of their other offerings. Moscow was first brewed as part of their 2011 World Tour series, and it must have struck a nerve, since they’re still brewing it. A hefty imperial stout brewed with rye. Funny story, the TTB (the government agency which approves labels on alcoholic beverages) gave them gruff about the name and required them to put “Product of the USA” on the label. Thank goodness for government regulation. So let’s open this sucker up and see what’s inside: 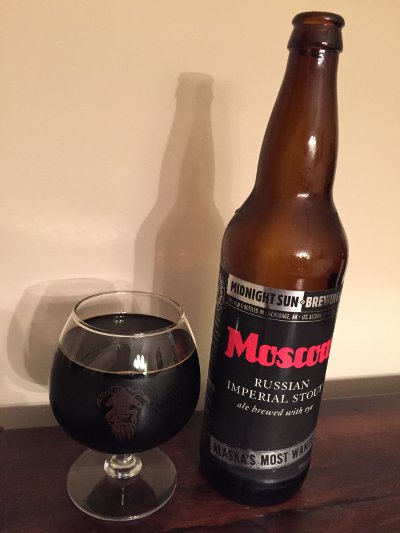 Midnight Sun Moscow – Pours black as a politician’s heart with cap of slowly forming but quickly disappearing brown head (would be really pretty if it stuck around a while longer, perhaps I just needed to pour a little stronger). Smells lightly of roasted malt with a certain rich sweetness, maybe a little caramel, perhaps some of that herbal, spicy rye. Taste features much more in the way of roasted malt, more bitter dark chocolate than coffee, with that rye spice and dryness kicking in towards the finish. Mouthfeel is well carbonated and as a result, not as rich or decadent as the nose may imply (not entirely a bad thing, to be sure), and indeed, the finish is almost dry (at least, for a beer like this). Overall, what we have here is a rock solid imperial stout, roasty with enough additional complexity to make it worth the stretch. I feel like I’m saying this a lot lately, but on the upper end of a B+

A very welcome start, and I hope to seek out some of Midnight Sun’s more prized regular releases, like Arctic Devil and Bezerker (No idea how easy or hard it will be to land those, but I’m an optimist). I’m glad the weather is turning cooler, as the seasonal stouts are starting to come out and play.