Breweries like Hill Farmstead represent a problem for us here at Kaedrin, and this is actually a microcosm of a more general problem. We rate beers here and we’ve been doing so for 4 years now, and I’ve been noting, especially over the past year, the toll of rating inflation and deflation. Put simply, beers that blew me away 4 years ago, while still great, don’t always compare as favorably to what I’m drinking now. Unfortunately, this means that every time I have a new Hill Farmstead beer I find myself reaching for hyperbole and the “A” level ratings in my admittedly flawed grading system.

There are probably numerous reasons for this, chief among them is that I’m the worst. Seriously, this is one of the reasons I started the blog. I knew nothing of beer, and writing about a subject has always been a good way to learn for me. Along the way, I started to develop an actual palate and became more comfortable with my subjective tastes. For instance, we all know of my ambivalence to coffee in beer (I won’t shut up about it), and at this point, despite the fact that there are some coffee beers that I appreciate, I have admitted that there is a genuine issue of taste there. But when you’re still a fledgling beer nerd, unique experiences and flavors are exciting. Straight up Belgian styles like Dubbels and Tripels were my gateway into good beer, and my fondness for them is reflected in early ratings, even as I drink less of them today. It took me a while to get into stouts and sours, but now they’re a mainstay of my drinking cycle. And so on.

I fully admit that Blogging is an ultimately selfish pursuit, and this learning process is one of the many benefits I’ve reaped from the process. Ratings are ultimately an arbitrary exercise, they’re subjective and don’t always make wholistic sense, but I feel like they’re useful to me, and even recognizing that rating inflation is going on feels important. Perhaps even something that applies outside of the other things I frequently rate, like books or movies. I won’t claim a universal truth or anything quite so profound, but as I grow older and my tastes (literal and figurative) evolve, I see this sort of process happening elsewhere in my life.

Expertise is a funny thing. You don’t become an expert by being perfect. For anything I’m good at, there was a time when I was terrible at it. I made mistakes, learned from them, and moved on. Writing this now, it feels rather trite, but it’s worth bearing in mind. Everyone is so impatient these days. With beer, you can’t just work your way through the Beer Advocate Top 100 or whatever Best-Of list you’ve discovered, as that will give you a very distorted view of beer. True, you will probably drink some great beer, but if you don’t have anything to compare it to, what is that really worth? There aren’t any shortcuts. Indeed, my typical response to gaining a lot of experience is to continually feel like I know less about the subject as time goes on. I know that sounds counterintuitive, but it makes sense from a relative perspective. When I first got serious about exploring beer, I had a few tactics and strategies and after a bit of time I thought I had a handle on this stuff, but then I kept finding new areas to delve into. My perspective of what beer was kept growing, such that my actual beer knowledge, while also growing, simply wasn’t keeping up with what I knew was out there. This isn’t just a beer thing, it’s a knowledge thing.

So we return to Hill Farmstead, considered by many to be the best brewery in America, and yes, I seek it out as much as possible. But in the grand scheme of things, that translates to a few opportunities a year. Whatever bottles I obtain (i.e. not many), I squirrel away for semi-special occasions (trying not to be too precious about it, but that’s a topic for another post). Of course, I generally consider those to be blog-worthy beers to review, so perhaps even this blog might give a newbie the wrong impression. I don’t crack open massive face melters at every opportunity, but it’s not really worth blogging about the hundredth local pale ale I’ve quaffed either. Newbie advice might be it’s own topic and I’ve blathered on quite enough for now, so lets get to it: If Florence, a wheat saison, was more regularly available, I would be crushing it at every opportunity. Look at this stuff: 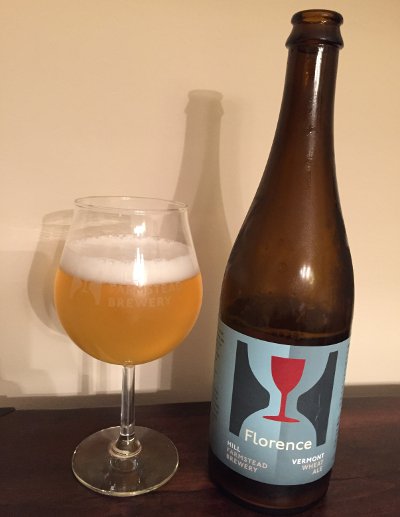 Hill Farmstead Florence – Pours a very pale, almost radiant straw yellow color with a finger or two of fluffy white head and great retention. Absolutely gorgeous. Smells deeply of wheat and musky, slightly funky yeast, and hints of spice. Taste hits up front with wheat and some spicy yeast notes that very quickly transition into a tartness that further blooms in the middle, some vinous white wine and tart lemons, finishing with that wheat and both the spicy and tart notes. Mouthfeel is very light bodied, highly carbonated, crisp, refreshing, effervescent, and downright quaffable. This is straightforward and simple, in the best way possible. Overall, another winner from Hill Farmstead. A-

So this probably marks the last HF beer I’ll try this year (certainly the last of the Operation Cheddar II spoils), barring the outside chance of a trip to Vermont (which I think may happen later in the winter). As per usual, I will usually seek out more when I can. In the meantime, I’ll just have to settle for the world class beer I get at Tired Hands. Poor me.