And the parade of high-ABV Avery “session” beers continues. What’s that? 17.22% ABV isn’t a session beer? Well, according to Adam Avery, it is: “I try to just limit myself to one per drinking session. So I’d call it a sessionable beer… your session just ends quicker.” In fairness, it’s only about 13-14% more than your typical session beer. Someone alert Ding.

I greatly enjoyed Rumpkin, Avery’s rum barrel aged pumpkin beer, and what we have here is a bourbon barrel aged pumpkin porter. Oddly, I wound up having this both on tap and from the bottle on Friday night (a local drinkery had just tapped it before we arrived for happy hour), so I’ve got you covered. Or something like that. 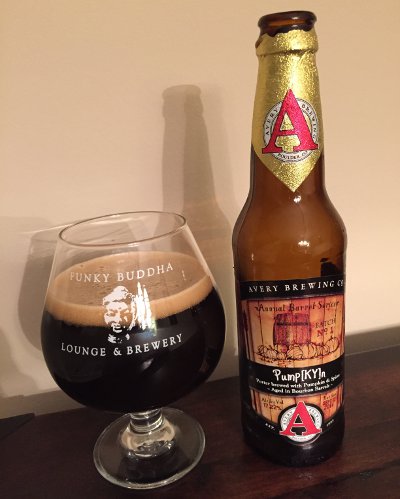 Avery Pump[KY]n – Pours a very dark brown color with a finger of tan head. Smells full of pumpkin pie spice, cinnamon, nutmeg, and clove, a little in the way of bourbon, oak, and vanilla as well. Taste is very rich and sugary, but not super sweet, lots of pumpkin pie spice comes through in the middle, with that bourbon, oak, and vanilla coming through more towards the finish, which is fairly boozy when you start drinking, and gets more boozy as you go along. Mouthfeel is well carbonated, full bodied, rich, and chewy. The spice comes through a little as well, as does the warming booze character. Overall, it’s pretty damn great, easily the equal of Rumpkin, maybe better. A-

At this point, while I’m pretty much done with Pumpkin beers for the year, I’m on board with Avery’s barrel aging program in general. It seems to be expanding, so I’m guessing we’ll see more of their stuff around here too. Next up, if I can snag one: Uncle Jacob’s Stout.