Every once in a while some respected craft brewer will mention that they enjoy the occasional Miller High Life or something, and everyone loses their shit. In reality, there is something amazing about what the macro brewers do, and it’s called consistency. These companies make a gajillion gallons of beer in dozens of facilities worldwide, and yet their resulting product is remarkably, almost mind-bogglingly consistent. The technical achievement, logistics, and efficiency that goes into making these beers is actually very impressive. They even go so far as to cryogenically freeze cans of beer to compare over long periods of time.

Craft brewers are often less consistent, for a variety of reasons. In most cases, this is well known and planned for, like IPAs with best-by dates that aren’t that far off or bottle conditioned beers that are actually meant to evolve over time. Intense and fresh flavors are difficult to maintain any sort of consistency with, if only because you can’t control what the consumer does with your beer. I suspect one of the reasons that hyped IPAs remain so highly rated is that they are almost always consumed very fresh. So I do think that Heady Topper is pretty consistent, but if it was the sort of beer that lingered on shelves for several months, I don’t think it would have quite the consistency in the public’s eye (incidentally, I have had an old can of Heady, and while it is still quite good, it’s nowhere near the fresh Heady).

Enter Fantôme, a brewery that doesn’t even pretend that their beers will be consistent. They have a regular range of saisons, but Dany Prignon is known to change up the recipes from year to year. Then you add in the fact that he’s also working with wild yeasts, which are notoriously difficult to control. This leads to tremendous variation in bottles of Fantôme, sometimes even bottles from the same batch.

In 2013, there was a distressing trend of wild yeast gone smokey. I picked up on just how different this was from the Fantômes of yore, but found even these Smoketôme batches to be inconsistent. I had one that had a light, almost pleasant smoke character that complemented more traditional Belgian yeast character, and then I had one that tasted mostly like burnt rubber. In years past, Fantôme had a distinctly tart, lemony character. Lately, it’s been more traditional saison, with a more earthy Brett character. I’m sure there are many people who feel burned by the inconsistency, who wonder if they got a bad bottle, but are hesitant to shell out more cash for an unpredictable experience. It’s an understandable sentiment, but then, this unpredictability, this inconsistency is actually what makes Fantôme so intriguing to me. I value consistency as much as the next guy, but sometimes you want something surprising. I find Fantôme’s wildly diverging beers to be charming for precisely this reason. Not every brewery should aspire to this sort of inconsistency, but Fantôme is not every brewery. This might not be a popular sentiment, but by all means, leave more on the shelf for me.

Here we have the Printemps, actually a seasonal Spring release whose recipe has changed considerably over the years. Fortunately, gone are the days of the Smoketôme, so fear not, the Ghosts are back: 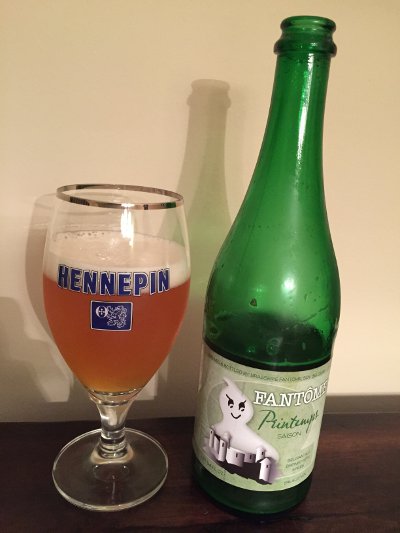 Fantôme Saison D’Erezée Printemps – Pours a golden orange color with a finger of fluffy white head that sticks around for quite a while. Smells strongly of Italian herbs, Oregano and Basil, along with that distinct musty funk character. In general, it kinda smells like pizza. The taste definitely displays more in the way of funk, musty and earthy, with that Italian Herb character coming through strong as well. It has some more typical fruity, spicy saison character lingering in the background, but that Italian herb, savory pizza character is what is really doing its thing here. Mouthfeel is very well carbonated, medium bodied, a little spicy, a bit harsh. Overall, a fascinating spiced saison, light funk, complex, interesting. B+

Perhaps because of the Smoketôme debacle, I am seeing Fantôme around more often these days. It’s still a rarity, but there is at least a chance to snag some every now and then, if you have your PKE meters running, that is.