Sometimes the Kaedrin beer acquisition department conspires to kick my ass with their high-ABV game, which of course, means they’ve gone on a purchasing jag of Avery beers. First, there was the rather fantastic 5 Monks a couple weeks ago, a beer which has earned the dubious title of most-alcoholic-beer-I’ve-ever-consumed. Then their machinations directed me to a bar serving a recent incarnation of The Beast Grand Cru, which depending on its exact vintage was somewhere between 16%-18% (and with that one, you could really tell*). This reminded me of the Kaedrin cellaring department’s meticulous aging of a bottle of 2010 Beast, which I figure is about ready to drink (the cellarman has been instructed to make preparations).

Finally, this past weekend, a chance occurrence lead a Kaedrin rep to overpay for a bottle of Rumpkin (amongst other treasures). In a bit of serendipity, circumstances sought to keep clean and sober for most of Saturday, so when I finally had a chance to dip into my fridge for a libation, this single bottle seemed mildly appropriate. Clocking in at 16.73% ABV, it’s not quite the monster that 5 Monks was, but it shares a lot of similar flavors. It is basically a huge imperial pumpkin ale that has been aged in rum barrels, one of their regular barrel aged releases. The flavor profile is similar to 5 Monks, but it’s got those additional pumpkin pie spice notes that really do differentiate it. It’s an admirable and intense take on a much maligned style, but it matched well with my annual horror movie marathon (which is being chronicled over at my generalist blog, if you are so inclined) and of course, ’tis the season for mutated fucking gourds: 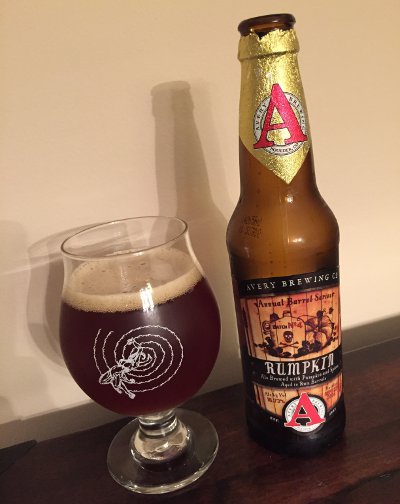 Avery Rumpkin – Pours a very dark amber color, brown in the glass, but with beautiful highlights when held up to the light, finger of off white head that has decent retention. Smells intense, lots of pie spice, cinnamon and ginger coming through loud and clear, and the rum barrel character adds a rich sweetness to the proceedings, a complement to the spice rather than something that overpowers. Taste is very sweet, lots of rich, sugary molasses, a little caramel, with a spicy/fruity note emerging in the middle (that pumpkin and pie spice coming through), followed by boozy rum, vanilla, and oak. Mouthfeel starts of very smooth, full bodied, rich, and syrupy, with ample carbonation, ultimately yielding to a more boozy, hot finish. Overall, this is very complex and interesting, a little sweet and boozy, but well, this is my kind of pumpkin beer. A-

Alas, aside from the cellared Beast, no more Avery brews on the future horizon, but I wouldn’t put it past the acquisition department springing a couple monster Avery beers on me. Bring it on, I say. In the meantime, they’ve got some other treats in store, and a line on some others.

Update: I have spoken too soon. A particularly ambitious Kaedrin purchasing rep from the acquisition department has informed me that I have a bottle of Pum[KY]n (Bourbon Barrel Pumpkin Porter) incoming. I’m pretty sure he’s trying to kill me. Please send help.

* Seriously, The Beast was uber boozy and hot. I didn’t take copious notes, but I plan on comparing this one to a cellared bottle in a few weeks or so. A friend got a coffee stout called Tweak, which also clocks in at around 16% ABV (I took a sip, and boy, the alcohol was much more hidden in that sucker. A pity it had so much coffee in it. Worth trying if you like coffee beers…)