Recent acquisitions have tended towards the hoppy, so I think you better hop aboard the hop train to delicious, as we’ll be spending a lot of time there in the next few weeks. Here we have an American Pale Ale from the midwest ballers and Conan fans at Three Floyds. I don’t normally go in for marketing blurbs, but this one is pretty funny:

From the dawn of time, humans have looked to the sky for answers. Space Station Middle Finger replies to all from its eternal orbit.

The notion of expending the resources to create a space station in this shape tickles me. A beer like this calls for proper glassware: 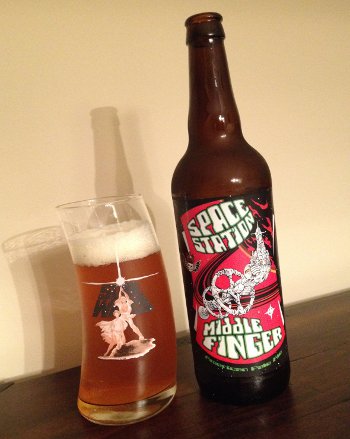 Three Floyds Space Station Middle Finger – Pours a hazy gold color with a couple fingers of fluffy white head with good retention and lacing. Smells of citrus hops, with some piney and floral aromas poking in too. The taste amps up the floral hop aspect a bit, but those citrus and pine notes stick around and an ample hop bitterness rounds things out in the finish. Mouthfeel is well carbonated, light bodied, thin, relatively dry, highly quaffable. Overall, this is a solid pale ale, but it’s not really in Zombie Dust territory (which might not be fair, except it’s the same brewery and it sorta begs the comparison). Not that I’m complaining, as I could drink this all damn day. B+

Three Floyds sure knows how to craft themselves a pale ale, and I’m lucky enough to have a couple more in the wings, not to mention a sour and a couple other rarities (well, rare for us lowly East Coasters).