This is the third round of Vermont Roulette, wherein I drink a random Vermont beer I’ve never heard of, and see what happens. So far we’ve had one big success and one… not quite as good.

Bent Hill is a brand new brewery, having opened their doors in June, so information is a bit sparse. The founders were environmental engineers or somesuch, and thus have all sorts of grand plans, including an initiative to grow most of their hops locally and, as I generally presume of so-called “green” brewers, the creation of a weather control doomsday device. One thing is for certain: there is no stopping them. And I, for one, welcome our brewing overlords. I’d like to remind them that as a trusted blogging personality, I can be helpful in rounding up others to toil in their hop fields.

In the meantime, let’s see how this rather unconventional take (at least, for an American brewer) on an IPA goes: 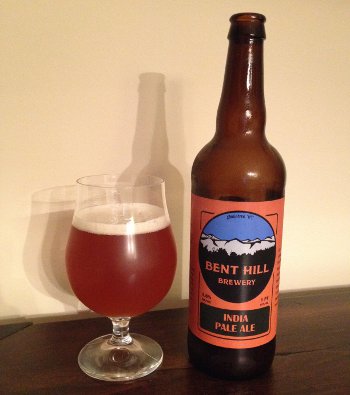 Bent Hill India Pale Ale – Pours a cloudy, dark orange color with a finger of white head that leaves some lacing as I drink. Smells distinctly English, earthy, spicy, floral hops, with some berries and pine in the background, with a substantial malty aroma, in the crystal malt or biscuit mold. Taste again feels more in line with an English IPA, with those earthy, herbal, spicy, floral hops doing their thing, and some citrus and pine playing along too, with a substantial malt backbone, light caramel and biscuits. While most IPAs tend to overdo the hops, this one may have overdone the malt side, though that isn’t necessarily a bad thing either. It never reaches diacetyl levels English, which is a good thing, but it still feels very English in execution. The label sez they use Cascade, East Kent Goldings, and Chinook hops, so I guess it’s a sorta old-school hybrid English/American IPA type of thing. Mouthfeel is well carbonated, medium bodied, generally pretty easy going. Overall, it’s an interesting change of pace and completely off the path of what your typical American brewer is doing with IPAs… which is refreshing in its own way. B

Three rounds of Vermont Roulette, and I survive to play the final round, coming next week. Stay tuned.