There are beers that I pine after (like any good beer nerd) that would rightly be called a White Wale. In the past, I’ve mentioned the sort of arbitrary, moving goalpost nature of White Whale beers, which leads neckbearded tickers to call stuff like Black Tuesday a Khaki Wale (unless you snag the 2009 vintage, in which case you’re totally slayin walez, bro), but a beer like this wouldn’t really even qualify for that dubious honor. It’s mildly limited and PA is not in Boulevard’s distribution, so there is that, but it’s not a beer that lights fires, except in that certain corner of beer dorkery occupied by saison addicts. But this does happen to be my corner of dorkery, so why has it taken so long for me to procure a bottle of this stuff? I don’t have a good answer, but I did finally manage to drink a bottle, so let’s get to it, shall we. This is Boulevard’s Tank 7 saison that’s been conditioned on Brettanomyces for 3 months, and it’s one of the better examples of Brett Saisons out there: 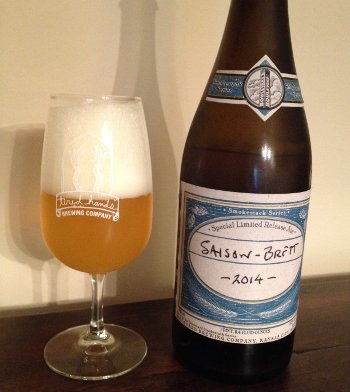 Boulevard Saison-Brett – Pours a slightly hazy, light yellow color with massive amounts of whispy head. The smell is pure funk, musty, earthy, spicy, floral, and even a little fruity. The taste has a nice Belgian yeast character, fruity esters and spicy phenols, banana and clove, but then that funk shows up and starts trashing the place with it’s earthy, musty, barnyardy, flowery goodness. Mouthfeel is highly carbonated and efferevescent, dry, light body but still substantial enough that it carries its weight and can stand up to food. Sometimes dry beers with high carbonation tend to be dominated by the mouthfeel, but in this case, those characteristics seem to pull out the flavor rather than mask it. It’s complex enough to keep the jaded beer dorks interested, but approachable enough that anyone who likes Belgian pales will probably get a kick out of it. Overall, this is indeed a very good funky beer and probably my favorite Boulevard offering to date. A-

It’s always nice to tick that long unticked box, and it’s nice to see what all the fuss is about.