Coming down the homestretch, only one more week until I start blogging about beer again. I don’t know about you, but I feel that these past 5-6 weeks have been a worthwhile (if temporary) interruption in my obsession with beer. Ironically, I’ve been writing more during this non-beer period than I normally do. This is not unexpected, as one of the points of this exercise was to learn more about other drinks, and seeing as though I’ve displayed varying levels of experience in the worlds of bourbon, wine, port, tea, and Scotch, I’ve got a lot of ground to cover. One of the primary reasons I blog is to learn, and surprise, I’ve got a lot to learn in those other subjects.

But I digress. This week, I’ll be covering a few Scotches. Today, we cover what may be my all-time favorite spirit (most definitely my favorite Scotch), The Balvenie 15. As luck would have it, I’ve already told the story about how I came to acquire this prized bottle and what makes it so special to me. In brief, I won the bottle in a charity auction, didn’t want to waste it on an unrefined palate, so I held on to it for a while while I sampled some other Scotches. Eventually, I cracked it open and lo, it was good. As I’ve continued to explore the world of whisk(e)y, I’ve consistently come back to this bottle, and been very impressed. One other notable aspect of this particular bottle is that even though it’s marketed as a 15 year old Scotch, if you look at the dates on the bottle, you’ll see that it’s actually 18 years old. It’s a single barrel offering, so most are probably closer to that 15 year date, but I guess I got lucky. According to this interview, this is something that still happens from time to time, though I imagine the whole whisky boom we’re seeing right now has cut into that a bit.

At this point, it’s been about 4 years since I opened it, and it’s definitely showing its age (in a bad way), but I’ve only got a few drams left in the bottle. I was trying to save it, but it seems that oxidation impacts even the high octane spirits. That being said, the notes below incorporate some notes I’ve taken a few times in the past, so I’m hoping it’ll still be a good view: 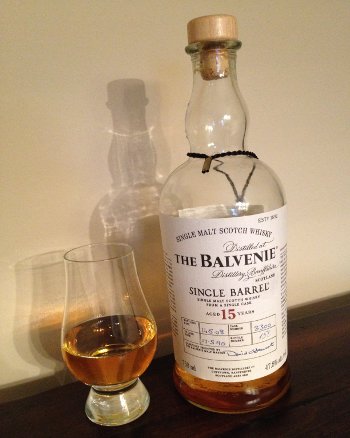 Balvenie 15 – Pours a gorgeous clear golden color. The nose has a nice sweetness to it, almost fruity, and a nice vanilla and oak component that always revs me up. The taste has a nice honey and oak feel to it, sweet and rich, but also faint hints of spice (maybe even smoke, but you reallly need to look for that and my mind may be playing tricks). Lots of complexity, and the finish lasts for quite a bit. The mouthfeel is smooth, oily, almost creamy. It coats your mouth and doesn’t let go. It’s obviously boozy, but it goes down very easy, little to no alcohol burn, though you can get a nice warming sensation in your belly. Overall, this is a spectacular whisky, though I suppose the caveat is that I’m probably a bit biased. Still, it remains among my favorite whiskys ever, and well worth seeking out.

Beer Nerd Musings: My experience with Scotch barrel aged beers is somewhat mixed, but I suspect that Balvenie barrels would be damn near ideal for this task. Alas, I’ve not heard of much in the way of beer aged in Balvenie barrels. My staff’s exhaustive research (i.e. 5 minutes of googling) has uncovered this Iowa beer from Court Avenue, a stout aged on Balvenie Double Wood wood. Double Wood, by the way, is probably the easiest Balvenie to come by, and it’s definitely a fine dram (I’ve only tried it once, but it was nice). Anyway, the way that beer phrased their description makes me think the barrel was dismantled or something. Also, the beer is a stout, but it’s only 4.6% ABV, which is not usually conducive to great barrel aged beers. Also, it only has one review, so it was probably a one off. Anywho, I do think the idea of Balvenie barrel aged beer could be fruitful, if any enterprising brewer would take that on…

Balvenie will always hold a special place in my heart, and probably in my liquor cabinet as well.