So far, we’ve conquered the world of Black and Green teas. And by “conquered”, I mean, I drank a cup of each. However, with each of those, I at least had some frame of reference, having sampled various bag teas and whatnot. Hardly impressive, but at least I had a general idea of what to expect with those two. Today, we tackle White Tea, something I’ve never had before.

At Kaedrin beverage compatriot Padraic’s suggestion, I took a flier on a sample packet of Chinese Silver Needle White Tea. He describes this tea as “astonishing, but also astonishingly expensive”, and he is correct, though $5 for the sample packet was certainly not a strain (but then, I’m a guy who buys obscenely priced barrel aged beers on the reg, so my priorities are clearly problematic). This being my first white tea, I have no idea what I’m talking about, so I’ll let Padraic explain:

While Darjeeling is commonly referred to as the “Champagne of teas,” I’ve always felt quality white tea should really be granted that status…it’s smoother, cleaner, and simply more elegant than Darjeeling. White tea is almost exclusively Chinese, and is the least processed of any type of tea. For example, black teas are picked, bruised to expose the essential oils, then allowed to oxidize (a process that is frequently and incorrectly called “fermentation.” Actual fermented tea is called Pu-erh, and is a story for another day.) Green tea is picked, allowed to wilt, and then usually heated to halt any further oxidation. White tea is picked and allowed to wilt, then dried to halt oxidation, sometimes in steam, but in the highest quality teas, in nothing more than direct sunlight. The resulting leaves are minimally processed, and brew up a liquor that is fresh and clean, often with lots of natural sweetness and floral notes. Perhaps not surprisingly, white tea is often the priciest of teas, due to a limited harvesting window and non-mechanized processing.

So Darjeeling is like Miller High Life, and White Tea is like Gueuze (the true Champagne of beers, excepting that hybrid style thing)? Good to know.

Now that I have a reference point, I’ll say that I found this reminiscent of green tea, though clearly distinct in a number of ways. I greatly enjoyed it, and even managed to take a picture of the leaves, because maybe I’m not as horrible as I thought. 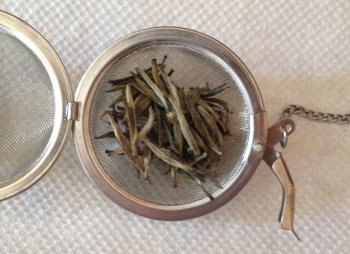 Silver Needle Organic White Tea – Pretty much clear in the cup, almost no color at all but there is a very light yellowish tint. The smell has a resemblance to the green tea I had, vegetal and grassy, though those notes are not as domineering or pungent as they were in green tea. This is more delicate and has a better note of sweetness to it, almost flowery. Very mellow and clean, with a subtle grassy flavor that lingers in the finish. Mouthfeel is clean and bright, very delicate feel. Overall, this is a really nice cup of tea. I wouldn’t say that I was astonished, but I’m really happy I tried it, and I’ll be happy to have another cup or two this weekend.

Beer Nerd Musings: I’ve got surprisingly little here, as I’ve already gone over the Champaign of beers schtick above. There are some beers that are brewed with white tea, though I have not had any of them, and none seem as well regarded as Magic Ghost. I would worry about the delicate nature of this white tea being overwhelmed by the beer in some way, though some white teas are supposedly more robust and thus may stand up better to the treatment.

So that just about covers it for Tea™. This upcoming weekend is going to be mostly Scotch drinking, though I do have one tea left (that will hopefully dovetail with some of the Scotch I’m going to drink). See you Monday, with a review of Balvenie 15, perhaps the best whisky I’ve ever had.