Alrighty then, that’s enough with the wussy non-alcoholic beverages for now (we’ll return to wuss territory next week). Let’s jump on the Rye Whiskey bandwagon. Before the dark days of prohibition, American Whiskey usually meant rye, and Pennsylvania was a rye powerhouse. You may have heard terms like Monongahela Style rye, or Rittenhouse rye, both of which are named for various regions in PA. Alas, prohibition came and went, eventually wiping out the PA distillers. Some brands, like the aforementioned Rittenhouse rye or Old Overholt, stuck around but moved operations to Kentucky (along with all the other whiskey producers). However, the current boom in whiskey is generating enough interest to revive some old traditions.

Enter Dad’s Hat Rye, a young “craft” distillery located in Bristol, PA (not far from Kaedrin HQ, and if I’m not mistaken, it’s very close to Neshaminy Creek Brewing). As a beer nerd, “craft” is a loaded term and it thus may give you the wrong idea about craft distilling. Making great Bourbon and Rye is an expensive and time-consuming proposition, which is why most of the great whiskey is coming from giant corporations. If you have a small operation and want to compete with great 10 year old whiskeys and the like, it’s going to be costly (what do you sell during those 10 years?). That’s why so many craft distillers supplement their income with other spirits like Gin, because they’re waiting for their whiskey to mature. There’s a whole bunch of tricks for this, like using smaller barrels (greater surface area theoretically means less time needed in the barrel, though I believe that is disputed by some) or finishing in other spirits barrels. I’m greatly simplifying, of course, and this isn’t meant as a total insult either. From what I gather, there are a number of well respected craft distillers in the country, some of whom have been around for quite a while and are putting out great stuff. But they tend to be a lot more expensive than their corporate brethren, which makes things a bit tough.

Dad’s Hat is a relatively new operation, but they seem intent on bringing rye back to PA, which is mighty nice of them. Their current flagship is a 90 proof rye made in the PA style. Near as I can tell, many of the Kentucky rye producers tend to have close to the minimum of 51% rye in their recipe, leading to rye that tastes rather similar to Bourbon (at least, to my untrained and inexperienced rye palate). Not so with Dad’s Hat, who has a mash bill of 80% rye, 15% malted barley, and 5% malted rye. The current flagship is aged for at least 6 months in charred quarter casks (there’s that smaller barrel I mentioned earlier). They have plans to release older, more mature whiskey down the line, and they’ve also released specialty bottles of their flagship rye finished in Vermouth barrels or Port barrels.

Now, I have some of the flagship here and I decided to play mad scientist and experiment on a portion of this precious juice. If you’ll recall, I brewed a rather large Imperial Stout last year, and I aged that on medium char oak cubes that had been soaking in bourbon for a few weeks. Once I bottled the beer, I had to do something with the leftover beer and bourbon saturated cubes, so I chucked them back into a mason jar with a few ounces of Dad’s Hat Rye. I have no idea if this will work or not. These are third use oak cubes and there was certainly some stout that made its way into the mixture, and you can see how it darkened the juice. But how did it taste? 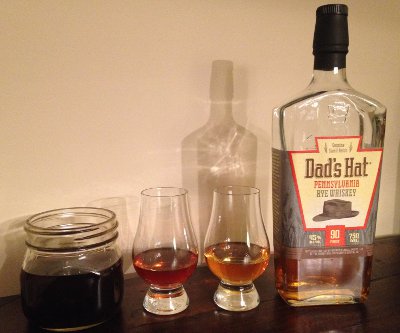 Dad’s Hat Rye – Pours a clear golden yellow color. The smell is pure, unadulterated rye, more like rye bread than a spicy rye and floral too. Not at all like bourbon or typical ryes, like Rittenhouse or something. The taste follows the nose, with lots of bready rye notes, some floral notes but also a hint of spice, not to mention some alcohol heat. Mouthfeel is smooth, light, and again not a lot of spicy feel. Overall, it’s a really fascinating dram and worth a try to see what rye is all about. Of course, I have almost no frame of reference for this, so take my thoughts here with a gigantic boulder of salt.

Dad’s Hat Rye, Aged on Third Use Bourbon/Beer Oak – Pours a much darker color (almost certainly caused by the beer, though it’s possible that the oak contributed something as well), a slightly cloudy amber orange color (the cloudiness is almost certainly dead yeast from the beer). That unadulterated rye character is still coming through strong, but the oak and beer seem to have added a lot of complexity, some sweet caramel, oak, and vanilla, and what’s more, it’s pretty well integrated. A little rough around the edges, for sure, but way better than I was expecting given the “production environment” or whatever you want to call my kitchen. The taste once again emphasizes that rye, but the beer is clearly adding some sweetness to the party, with a little oak and vanilla, maybe even some char from the oak. The mouthfeel is actually smoother, though it comes off as being a bit heavier (not entirely unexpected, as the stout did finish with a rather high FG). Overall, this was actually a very worthy experiment that I may need to repeat. It also perhaps bodes well for Dad’s Hat’s future efforts… or not! I have no idea what I’m doing here, so get yourself another one of those gigantic boulders of salt.

Whiskey Nerd Details: Same as above, but aged on oak cubes that had previously soaked in Evan Williams Single Barrel 2003 (for 3 weeks) and Kaedrin Bomb & Grapnel (for another 3 weeks). I created this concoction in early December, so it’s been a solid 4-5 months.

Beer Nerd Musings: Because Dad’s Hat is local, several local breweries have played with Dad’s Hat barrels. Notably, for me, is Tired Hands, who have used old Dad’s Hat barrels for several of their beers. Alas, while both beers were fantastic, I’m not entirely sure how much the barrels contributed. I liked regular Only Void base beer better than the Rye Barrel Only Void. On the other hand, I enjoyed FatherBeast more than MotherAnimal, though there may be other factors at play there. In a more general rye whiskey sense, I’ve had reasonable luck with beers aged in rye barrels. The Rittenhouse Rye variant of Eclipse was probably my favorite of the series last year, and Uinta’s Labyrinth was a monster that uses both rye and bourbon barrels. So good potential here, and I look forward to exploring rye and beer some more.

So there you have it. There’s really no reason I shouldn’t go on the distillery tour, as Dad’s Hat is only about an hour away… Someday, perhaps. Stay tuned for a Session post on beer writing on Thursday and next week, we hit Tea!