So I either drank this about 2 months later than I was supposed to, or about 6 years before I was supposed to, depending on how patient you are. Yes, this is the latest installment in The Bruery’s 12 year long mission to create a beer for each verse of the 12 Days of Christmas. For the perseverant among us, the idea is to cellar each installment until 2019, when 12 Drummers Drumming is released and you can have an epic vertical tasting of a dozen 11%+ ABV beers and then die happy. For the rest of us, it’s a fun annual exercise.

Last year’s release, 5 Golden Rings, was a bit of a misfire. I didn’t hate it, but I don’t think it came together the way The Bruery had hoped and it currently holds the lowest grade I’ve ever given to a Bruery beer (others were less generous). That was disappointing, as I really loved 3 French Hens and 4 Calling Birds wasn’t half bad either. So, will 6 Geese-A-Laying represent a return to form? Only one way to find out, even if I am drinking it 2 months late (or 6 years early, though screw all that – I’m drinking it now, you gotta problem with that?): 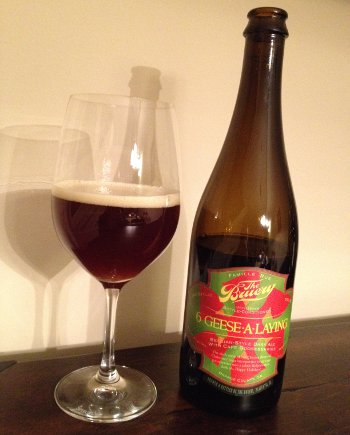 The Bruery 6 Geese-A-Laying – Pours a deep, dark amber color (chestnut?) witha finger of off white head. Smells of Belgian yeast, light spice and high esters, dark (but not roasty) malts offset by fruity aromas (clearly the gooseberries). As it warms, the nose takes on a very nice pie aroma, cherries and plums, or something like that (probably gooseberry pie, but I’ve never had that). Taste is very sweet, malt-forward, crystal malts up front with Belgian yeast spice coming in the middle and those berries making themselves known towards the finish. As it warms, some booze comes out to play, and that pielike character hits the taste too. Mouthfeel is full bodied, rich, a little sticky but with enough carbonation to make it approachable. Not a lot of booze until it warms up a bit, but it’s fine. Feels pretty heavy, low attenuation stuff, though it works and it should give the beer legs for aging. Overall, this is very good stuff. I can’t say as though it’s mindblowing or anything, but it works. I’ll give it a B which is technically the same grade I gave 5 Golden Rings, but due to escalating grade inflation in the past year, I’m going to downgrade that one to a B-, as this was clearly superior, even if it’s not blowing my mind.

I’ll be curious to see how age treats this one, so I’d like to track down another bottle (incidentally, I haven’t seen this in PA for some reason, which is odd). When I picked this one up, there were still bottles of 5 Golden Rings laying around, which further underscores its disappointing performance. Anywho, I pine for the return of barrels to this series, which were great in 3 French Hens and apparently spectacular in 2 Turtle Doves. According to Ed, The Bruery doesn’t know what 7 Swans-A-Swimming will be “as we haven’t brewed a pilot batch yet”, which leaves little time for Barrel experimentation. I’m crossing my fingers anyway. In the meantime, I’ve got a couple other Bruery beers burning a hole in my cellar, so keep an eye out for more reviews in the next few weeks.