Let’s start this review off right with a stupid meme: 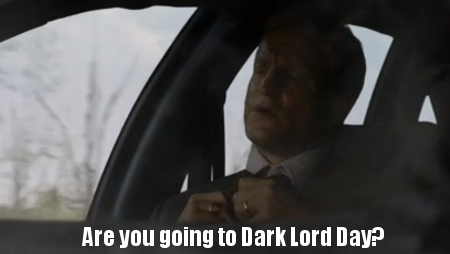 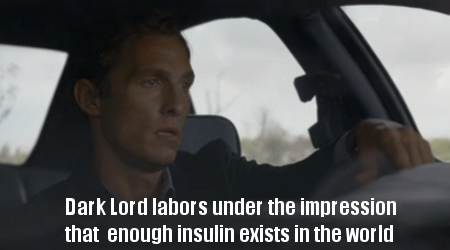 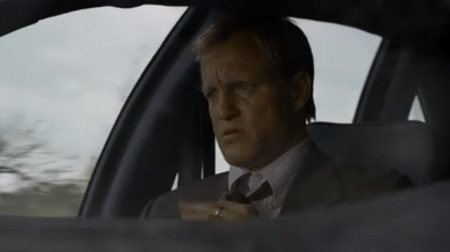 So unfortunately, I’m going to have to play Rustin Cohl (i.e. McConaughey) to collective beer nerdery’s Martin Hart (i.e. Harrelson). Despite all the accolades everyone seems to hand out, I did not particularly love this beer. It’s not awful or anything, but it’s one of those beers that’s hyped to high heaven or at least, it used to be… The hype has slowly been shifting to the ever more rare barrel aged variants, though this regular, non-BA version still commands pretty high ratings and ridiculous prices in the secondary market.

For the uninitiated, Dark Lord is a massive 15% ABV, coffee-infused imperial stout made by Three Floyds in Munster, Indiana, and it’s only available at the brewery on one day out of the year (aptly titled Dark Lord day). This is a practice that has spread to just about every other brewery that has a big imperial stout release (think Darkness day or Hunahpu’s day). It’s very much a publicity stunt, though it’s also more of a festival than a beer release (though the beer is the primary motivating factor), what with lots of other beers on tap and live music and large crowds. Attendance is capped at 6000 tickets, and there are apparently huge lines (according to these guys, the wait, even when they had a ticket, was three hours) and lots of beer sharing and trading and other hijinks. Allocation is 3 bottles per ticket (for the math impaired, that’s 18,000 bottles), so it’s not like this is a particularly rare beer, it’s just that the distribution is limited.

I got my bottle in a trade with a gentleman from Chicagoland and have been holding on to it for a rather long time. Part of the reason for this is that everyone says the beer gets better over time and that it’s cloyingly sweet and boozy when it’s fresh. This particular bottle was a 2012 vintage, so it’s had almost 2 years to mellow out. Was it worth the wait or the hype? Not really. I certainly wouldn’t mind trying a bottle of fresh stuff (or any of the BA variants (like that will ever happen)), but this definitely did not live up to expectations. 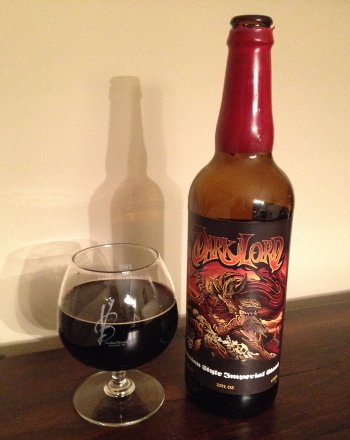 Three Floyds Dark Lord – Pours a gloopy black color with a minimum of head, barely a cap of tan head that quickly dissapates. Smells of caramel, brown sugar, a slight hint of coffee and roast. I rather liked the nose, at least at first. Taste is super sweet, sugary, some rich caramel, lots of sugar, maybe brown sugar, very sweet, not much in the way of roast or coffee, and did I mention that this was sweet? As it warms up, the coffee comes out a little more, but it feels like I’m drinking over-sweetened coffee. I don’t think the age has done the coffee any favors, and it certainly doesn’t stand up to the rest of the beer. Taking my cue from Rainier Wolfcastle: like the goggles, the coffee and roast do nothing. The onslaught of sugar and sweetness is unstoppable. It’d be almost admirable in its extremity if it was a little more balanced. Mouthfeel is full bodied, heavy, low but appropriate carbonation, definitely a sipper, some booze, but not overly hot or anything… The sweetness is hard to overcome if you’re trying to house a bottle by yourself, so this is perhaps something you’ll want to share. Overall, I can’t help but be a bit disappointed. Its not bad, but its nowhere near my favorite top tier stuff. B-

So there you have it. I’d obviously rather be drinking this than a lot of other beer, but at the same time, it doesn’t seem worth the hoop jumping that it takes to get a bottle (directly or indirectly). Back in the day, this was what I’d call a white whale beer, something I never expected to get my hands on, and with the ever shifting goalposts of beer nerdery, it seems that the regular Dark Lord has been slipping in reputation of late. As mentioned before, the barrel aged variants are a different matter, and to be sure, I could see the added complexity (and age) doing wonders for this beer (alas, I have severe doubts that I’ll ever sample that stuff). Indeed, when I got towards the end, instead of powering through the last few ounces, I poured some bourbon in the remaining brew, and it actually allowed me to finish it off (this is pretty sad, really, but hey, it worked). Then I went to bed, because damn. Even spreading this out over a few hours, it was kinda tough.