Finally. I know that if I call this a white whale beer, a million neckbearded beer dorks will descend upon Kaedrin HQ with righteous fury, but it’s been several years of near misses for me, so it was a hard fought victory for me. For those of you in the distribution range or who don’t live in a state with archaic booze law (i.e. states that allow you to have beer shipped), you’ve got it easy. Well Deschutes distributes to Philly now (apparently one of the few east coast places that gets some Deschutes), so I’ve finally got my greedy paws on some of this stuff.

So what’s the big deal? Well, The Abyss is a monster 11% ABV Imperial Stout, and when you gaze into it, it gazes back. It’s actually got quite the recipe. Brewed with black strap molasses and licorice, finished with cherry bark and vanilla beans, and partially aged in oak barrels. From what I can tell, this changes each year, but the 2013 reserve is 6% aged in oak Bourbon barrels, 11% aged in oak barrels (presumably new oak), and 11% aged in oak wine barrels (Pinot Noir, I’m told). Some earlier vintages have left out the cherry bark and vanilla beans, and also had a slightly higher barrel percentage (and I gather that the Pinot Noir barrels have only been around for a couple years as well), but I ain’t complaining, cause this is decent stuff: 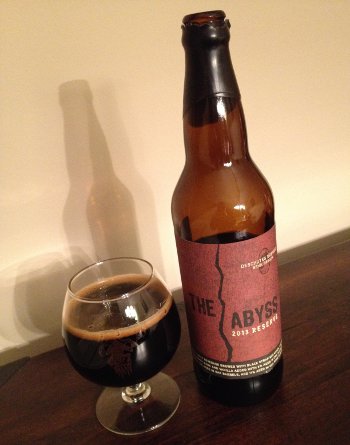 Deschutes The Abyss 2013 Reserve – Pours pitch black with a gorgeous finger of brown head that gradually subsides to a cap with decent retention. Smells heavily of roasted, dark malts, perhaps some of that molasses and vanilla pitching in as well. Nice complexity in the nose, I keep picking out new notes. As it warms, there is something bright but not quite fruity in the nose (perhaps the wine barrel or cherry bark?) Coffee, chocolate, sugary caramel, It just keeps coming. The taste starts off with that rich caramel, but that quickly evolves into vanilla, then chocolate, a heavy roasted malt character, finally leading into a relatively bitter finish (bitter both from hops and from roast). I don’t get a lot of direct oak or Bourbon, but the barrel aged character does sorta come out in the rich mouthfeel of the brew. Speaking of which, the mouthfeel is rich, thick, and chewy, full bodied but reasonably well carbonated. The bitter finish dries out the mouthfeel a bit, but it’s still a big, rich beer that will coat your mouth and linger for a bit. Overall, this is excellent, even if it’s not quite ticking my favorite stout checkboxes, it’s still really impressing me… A-

Zuh? Best After 08/16/14? It turns out that it’s just fine to drink fresh, but they claim it will age very well too, though it’ll be “entirely different” a year on. So you’re saying I need to hunt down another bottle? It looks like it. I could definitely see that bitterness mellowing out over time, and perhaps some of those other elements becoming better incorporated.

2 thoughts on “Gazing Into The Abyss”