Drie Fonteinen is one of the powerhouse lambic breweries, so this beer is something of a curiosity. It seems that famed master-blender Armand Debelder saw fit to branch out and try something only tangentially related to lambic. This is basically an English style porter beer that is brewed with wild yeast cultured from lambic casks. If this sounds like some sort of blasphemous experiment, well, it’s not. Porter didn’t always resemble what it does now.

I’ll leave the history to those who know better than I, but suffice to say that descriptions of 19th century porter tended to use words like: sour, tart, astringent, and acid. As Martyn Cornell notes in the linked post, these are not words you will find in the descriptions of porter in the latest Brewers Association beer style guidelines. To greatly simplify the possible reasons for this tartness, it seems to be attributable to both age and wild yeast infection (the combination of which are a virtuous circle, as wild yeasts do their thing over very large amounts of time).

So basically, this beer isn’t the lunacy that it might initially sound like. Indeed, I’ve seen various other breweries take on this concept of sour porter as well, though I can’t really speak to historical accuracy for any of these beers. But forget about historical accuracy, do these suckers taste good? Let’s give it a shot, eh? 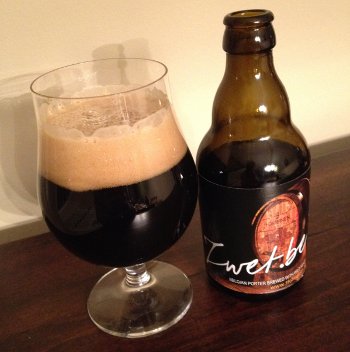 Drie Fonteinen Zwet.be – Pours a dark brown color with a couple fingers of tan head that leave plenty of lacing as I drink. Smells very much like a porter, lots of roast and toast, but also a sweetness or fluffiness that indicates something less intense. Taste features a nice, light roast and toast, as befitting a porter, but the finish has a slight tweak to it that lightens things up a tad. It’s not quite sour or really all that tart, but perhaps in that direction. Mouthfeel starts off full bodied and highly carbonated, but that sorta yields to a gentler feeling towards the finish. Again, it’s not sour and won’t cut up your gums like an American Wild Ale, but there might be an ever so slight hint of acidity. Overall, a solid, interesting take on a porter, though not quite as “wild” as I thought. That being said, I’d rather have this than most other porters (admittedly, they’re not my style, but still). B+

I’d be curious to see if the wild elements come out more over time, so if I find me another bottle, I might just stash it away for just such an experiment. That being said, I’d probably rather have me some Drie Fonteinen lambics if they could be had…