Hey! I have an idea. Let’s take Seizoen Bretta, a juicy funk machine that came out of nowhere and melted my face about a year ago, and age it on oak for a while. That sounds fun, right? Well it appears that David Logsdon had the same idea and went ahead and made some. Great minds think alike. And so do David and I! (Sorry David, but you walked into that one). Many thanks to Jay for sending this my way. 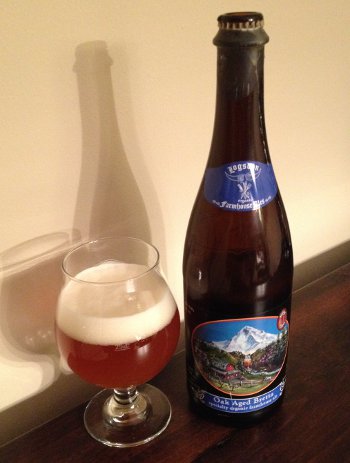 Logsdon Oak Aged Bretta – Pours a hazy golden orange color with a couple fingers of fluffy but dense head that has good retention and leaves some lacing as I drink. The aroma is pure funk, some earthy notes, some farmhouse yeast spice, but a beautiful juicy fruitiness as well, and maybe a faint hint of that oak, but I’m really looking for it in the nose. The taste is also quite funky, lots of spice, a little earth, maybe even some pie-like crust flavors, and a big juicy fruit component, tart pineapple, with that oak appearing in the middle and finish. Mouthfeel is dry, highly carbonated, effervescent, and crisp, maybe a hint of pleasant acidity too. Overall, this is a superb funky saison, complex and delicious. Easily the equal of regular Seizoen Bretta, though I don’t know if it’s better. But we’re still talking about an A grade here, so that’s just splitting hairs.

So I seem to have exhausted Logsdon’s Seizoen program, but they’ve got a few others that sound promising (and some that will probably be a bear to acquire). And quite frankly, I’d hit up any of these Seizoens on a semi-regular basis if they distributed out here.