What beer to drink on New Years Eve? I’ve typically fallen on a big, effervescent saison for this task, but the true answer to this conundrum is the Champagne of Beer: Miller High Life. Unfortunately, I was fresh out, so I had to settle for an American imitation of a Gueuze (which is the actual Champagne of Beer, for the record). I’ve mentioned a few times recently that brewing is not an activity for the impatient, and these Bruery folks certainly seem to have a lot of foresight and patience in developing their Barrel Aging program.

They’ve got a 5 year old Solera series going with their Anniversary beers (like Coton or Bois), and this Rueuze beer calls to mind the great Belgian lambic aging traditions. This is a blend of three different vintages of oak aged sour blond ale. The traditional Gueuze is a blend of 1, 2, and 3 year old lambics, and The Bruery is conspicuously silent on the age of their three vintages, so I’m guessing it’s not an exact parallel, but I’m not going to complain because this is pretty good, if a bit pricey: 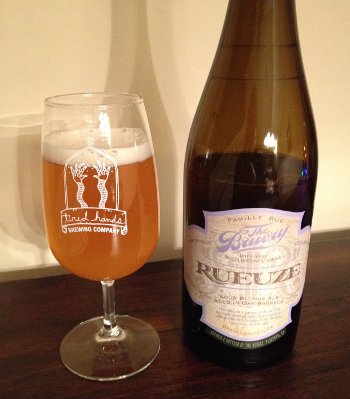 The Bruery Rueuze – Pours a golden yellow color with a finger of fizzy white head that quickly subsides to a cap that hangs out for a while. Smells funky, some musky, earthy aromas, but also a very nice fruity, vinous note, and that barrel character is definitely making itself known. Taste starts off with a bang of sourness, a little sweetness, tart vinous fruit, musky notes in the middle, and towards the end, a very nice oak character pitches in along with an intense sourness to pucker that finish, but in a balanced way. Good pucker factor. Mouthfeel is very well carbonated, effervescent really, a little pleasant acidity from that sourness, not super dry, but in that direction. Overall, this is a rock solid beer, complex, balanced stuff that doesn’t quite hit the heights of the best lambics, but comes pretty close. A-

Solid stuff. I’m a bit behind on my Bruery beers, so you’ll probably see a few new ones pop up in the coming month or two, including one that appears to use the same oak aged sour blonde ale base (though this other one is fruited). The other is Mash, a bourbon barrel aged barleywine (truly a beer after my heart).

3 thoughts on “The Bruery Rueuze”