Boulevard recently made headlines by combining with European brewing giant Duvel Moortgat. This has caused much hand wringing amongst a certain set of beer nerds, but I have a feeling they’re going to need to get used to such things, as I can only see brewery combinations or sellouts becoming more and more common. At least in the case of Duvel Moortgat, we’ve got a company with a proven track record of stewardship, being the parent to such breweries as Achouffe and Kaedrin favorite Brewery Ommegang. I guess not all large breweries are evil, eh? Of course, Duvel is dwarfed by the likes of the great satan, AB Inbev (who are several orders of magnitude larger), but still.

For my part, Boulevard has made some really interesting beers, though I’ve never been entirely in love with them. One of the few that really connected with me was The Sixth Glass, a solid quadrupel that provides the base for this Bourbon Barrel treatment. In addition to the barrels, we’ve got a tiny proportion of young beer (16%) and also a small addition of cherries (so small that they don’t really register beyond the typical fruity esters present in Belgian strong darks). Sounds like a pretty refined beer to me, so let’s get to it: 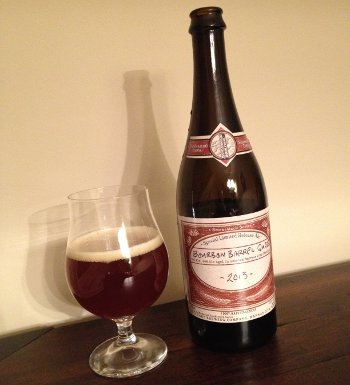 Boulevard Bourbon Barrel Quad – Pours a cloudy brownish orange color with a finger of fluffy white head that quickly subsides into a cap that manages to stick around for a bit. The nose is very quad-like, lots of spice, a little dark fruit that is kinda hard to place, Belgian yeast. Not getting much barrel out of the nose at all, but maybe a bit of boozy bourbon is there when it warms up. The taste shows more of that barrel character, which has imparted a richness not normally present in quads, along with the usual Belgian notes of yeasty spice and dark fruit. The mouthfeel shows plenty of carbonation, keeping this squarely in the quad realm, but also that richness from the barrel aging. Full bodied and very well balanced. Overall, this is about as good as I could expect out of a Barrel Aged quad, even if it’s not completely melting my face. B+

Certainly a good showing, and their other “Limited Release” Smokestack Series beers certainly hold a lot of interest here at Kaedrin, notably the Saison Brett (which seems right up my alley) and maybe even the Imperial Stout. Stay tuned, as I’m positive that I’ll snag one of those sooner or later.