As mentioned earlier this week, I’ve attempted to harvest some yeast from old cans of Heady Topper. It seemed to work, though I’m not sure how much I was actually able to grow the yeast. It seemed pretty lethargic to start, it took a few days to seemingly do anything, and while I could see the yeast had grown, I’m still not entirely sure there was enough to be viable for a full batch. I guess there’s only one way to find out, eh? I’ve been toying with this recipe for a hoppy red ale for a while now, and I’m pretty excited to try it out. It’s also a batch that doesn’t require lengthy secondary treatments (like the RIS or Brett Saison), so this may be ready by Christmas (red ale for Christmas? Sounds good to me), though I’m pushing it a bit close for that. Anywho, let’s get this party started: 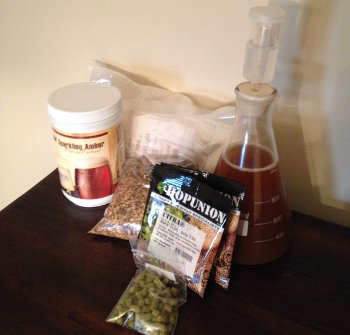 Nothing particularly fancy going on here. Very simple specialty grains for steeping, partly because I just went for the Amber extract (I suppose I could have stuck with all light DME and incorporated the Amber malt directly, but this was easier). The Turbinado sugar is pretty large, I guess, but I should get enough body from the Amber extract and Crystal 60, so that should be fine.

I’d originally planned for a Simcoe and Amarillo hop mix, but apparently Amarillo hasn’t made its way to my homebrew shop yet, so I fell back on Citra and Mosaic. Citra has been growing on me of late, and Mosaic is relatively new (released in 2012). Mosaic is apparently the daughter of Simcoe, and it has Simcoe-like properties, but also apparently a wider range of tropical fruit aromas. I’m sure this will turn out fine.

Original Gravity: 1.065 (about 15.8°Bx). This is just about on target, and should yield something around 7% ABV if all goes well. I am a little worried about the yeast though, so I bought a packet of Wyeast 1056 in case things don’t go so well with the harvested Heady yeast. Fingers crossed for a strong ferment!

Up next on the homebrew front is the RIS bottling (hopefully next weekend), and then I’m not sure! I definitely want to do a Barleywine in the same way I’m doing the RIS (split batches, with one bourbon oaked, etc…) And Fat Weekend IPA is also on the schedule. I’m starting to accumulate a bunch of unused ingredients, stuff that’s just laying around. Maybe I’ll make something called “Clusterfuck Ale” with whatever I have laying around. I definitely want to make an easy-drinking sessionable pale ale for the summer (around 4% ABV). After that, who knows? I may tweak the saison recipe to get more Brett exposure, maybe incorporate some oak into that too. So many ideas, so little time (and only so much liver).