The word “Santé” roughly translates to “to your health”, and as such, is often used as a toast, akin to “Cheers” or “Prost” and so on. But in this case, it has a double meaning. Fantôme brewer Danny Prignon brews a new beer every year for a charity that helps those in need of healthcare not provided by standard means, and thus a second meaning of Santé comes into play. That sneaky ghost, always doing the right thing. It’s hard to find much info on these beers, but I gather that the recipes are different every year, though they are always saisons (as befitting Fantôme’s general nature). This particular edition is actually from 2011, and seems to be particularly well regarded, though it is clearly showing its age at this point: 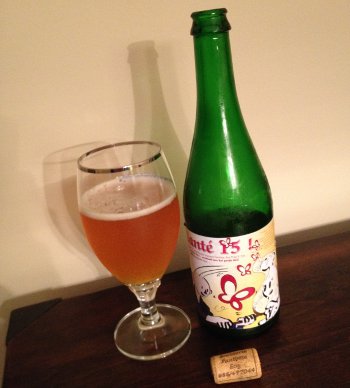 Fantôme Santé 15! – Pours a golden yellow color with a finger of bubbly white head that quickly resolves into a ring around the edges that stays around for a while. Smells of earthy, fruity funk, Brett is clearly doing its thing here. Taste is very sweet with a surprising fruity note, almost raisiny, like an aged dubbel or quad, though this is clearly its own thing. That Brett kicks in towards the middle with some tart fruit that intensifies into a full blown sour note in the finish. Mouthfeel is on the upper end of medium bodied, with lower than normal carbonation for Fantôme, but still ample enough to work. A bit of stickiness lingers in the finish as well. Overall, this is yet another interesting offering from Fantôme. It’s showing its age a bit, but it’s really brightening my outlook after a long day at work. B+

Fantôme continues to fascinate, and I’m always up for trying a bottle of the stuff. You never know what you’re going to get.