Nothing sez Halloween like spooooky… apricots? Alright, that’s a stretch, but I always jump at the chance to try a new Cascade beer. This one appears to be their most popular beer, having garnered the most reviews and yet maintained a pretty great rating. The base for this is apparently a Belgian style tripel (which explains some of that musty character mentioned in the notes below, I think) which is aged in old oak barrels for about a year, then aged on fresh apricots for an additional 8 months. It looks like older vintages of this beer were higher ABV (and varying stays in barrels too), so maybe that tripel has been downgraded a bit, but whatever, this beer still sounds excellent, so let’s dig in: 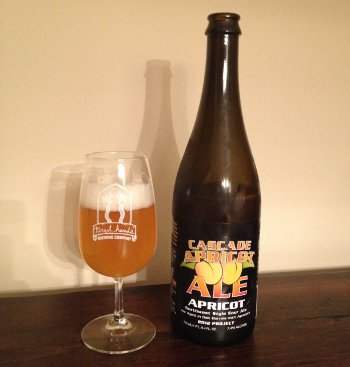 Cascade Apricot Ale – Pours a hazy yellow color with a couple fingers of fizzy white head that still sticks around a bit. Smells very musty, maybe even some spice like from Belgian yeast, with the fruitiness barely peeking out from behind that sour twang. Taste is quite sour, not as much fruit as you might expect (though it’s there), and did I mention sour? As it warms, I feel like the apricot starts to come through loud and clear, and that sharp sourness softens (or my gumline has just gone numb or something), with some tannic oak tempering things towards the end and lingering into the finish. Mouthfeel is highly carbonated, tannic, a little acidic, but crisp and relatively dry enough to make it approachable. Overall, it’s a very well executed oak-aged sour, more sour and less fruity than expected, but still damn good. A-

Another winner from Cascade, I’ll have to figure out when and where to pick up some bottles of their more limited releases (anything that starts with “Sang” sounds pretty awesome to me). Or find a mule in a state where they can ship beer (stupid PA liquor laws, and DE and NJ aren’t excused on this one either, as Cascade can’t ship there either). In other news, I’ll have actual Halloween themed beers for you later this week.