Yet another brewery that has established itself in just the past couple years, and yet has quickly achieved rockstar status amongst beer nerds. Crooked Stave operates out of Colorado, where mad scientist Chad Yakobson created his brewery as an extension of his academic work studying various strains of Brettanomyces. As such, all of the beers Crooked Stave produces are Brett fermented, which is a pretty unique approach to brewing these days.

This particular beer was evolved from Wild Wild Brett Orange, one of a series of Brettanomyces fermented beers brewed to match the seven colors of the rainbow. Each batch of this beer uses the same wit beer base, but differs depending on the fresh citrus available that season. This was the summer variant of St. Bretta, so it was made with fresh Blood Orange. Many thanks to Jay from the most excellent Beer Samizdat blog for slinging this beer my way: 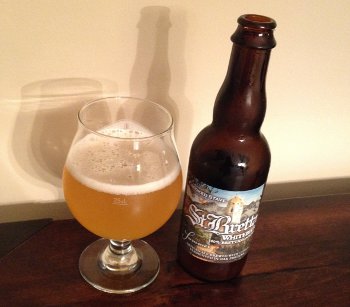 Crooked Stave St. Bretta Summer – Pours a cloudy straw yellow color with a finger or two of white head with decent retention and minor lacing. Smell is filled with funk, a little earthy, maybe even a little juicy (this is my kinda funk), with more typical wit beer spicing (citrus peel, coriander, etc…) also apparent. Taste is also driven mostly by that earthy, juicy funk, edging towards sourness but never quite reaching puckering levels. Some spice comes to the party too, and it all blends together well. Mouthfeel is highly carbonated, with that almost-sour bite snapping in around the middle, finishing relatively dry. Overall, this is superb. A-

A fantastic first taste from Crooked Stave. Jay sent me another of their beers, which is burning a hole in my cellar, and I’m most definitely going to have to find a way to get ahold of more of this stuff in the future.