Back in college, I expended some of my few electives on Defense Against the Dark Arts classes. I did so exactly for monster beers like this, but my defensive techniques were no match for Voodoo brewery’s most prized beer. Indeed, this sucker sits atop the Top New Beers list on Beer Advocate, with sky high ratings and ISOs all over the place.

I used to think this was Voodoo’s standard Big Black Voodoo Daddy (a hearty 12.5% ABV imperial stout) aged in bourbon barrels, but it appears to be its own beast (Voodoo has barrel aged BBVD as well, and I’ll get to those soon enough). Depending on who you believe, it clocks in at somewhere between 13.5% ABV and 15.5% ABV, and in this case, it was aged in old Pappy Van Winkle barrels. As it understand it, PVW barrels impart mystical healing powers, but being black magick, there is usually some corresponding damage being done elsewhere. This ain’t no second year “tickling curse” dark arts here. So sharpen your wands and prepare your counter-jinxes and defensive charms, we’re going in: 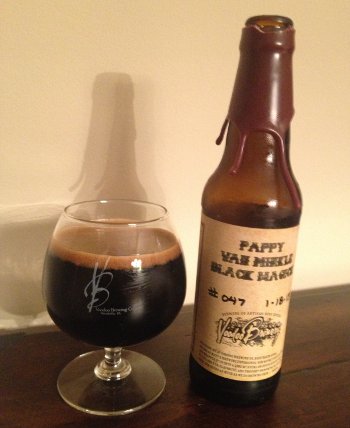 Voodoo Pappy Van Winkle Black Magick – Pours a thick, gloopy black color with a full finger of lightish brown head. Really pretty looking. Smells heavily of caramel, bourbon, vanilla, and oak, classic bourbon barrel aged stout stuff here. Taste is extremely sweet, lots of rich caramel notes, and that heavy bourbon, vanilla, and oak character pervading the whole thing. Some hints of chocolate and roast open up as it warms. Maybe a hint of booze too, but not nearly as much as you’d expect. Mouthfeel is thick and chewy, rich and full bodied, even reasonably well carbonated for such a monster. Some booze heat as well, and it coats the mouth and lingers for a while too. Overall, this is spectacular stuff. I can see it being too sweet for some, but it hit the spot just right for me, so I’ll say it just barely cleared the bar for an A

There was a single bottle limit on this stuff at the Philly release, but the folks at the brewery release fared a little better. Still, by my count, only 667 or so bottles were made, so I’m pretty happy I got my grubby hands on it (as well as the two other variants). The release was in April, so I’m not sure what the hell I’m waiting for. Expect some more reviews of Voodoo’s barrel room collection in the coming weeks. They only make Black Magick every other year (last release was 2011), but they’ve got plenty of goodies in their barrel room right now and I just saw that they’re doing another release in September. No details on that release yet, but I’ve got my fingers crossed for some BA Barleywine and Wee Heavy.